And after some days Paul said to Barnabas, “Let us return and visit the brothers in every city where we proclaimed the word of the Lord, and see how they are.” Now Barnabas wanted to take with them John called Mark. But Paul thought best not to take with them one who had withdrawn from them in Pamphylia and had not gone with them to the work. And there arose a sharp disagreement, so that they separated from each other. Barnabas took Mark with him and sailed away to Cyprus, but Paul chose Silas and departed, having been commended by the brothers to the grace of the Lord. And he went through Syria and Cilicia, strengthening the churches.— Acts 15:36-41

At first glance, this is an abrupt end of a powerhouse alliance. Barnabas, known as “The Encourager,” is ultimately the one and only man who advocated for Paul when both Jews and Christians rejected him. He essentially dragged Paul out of a ten-year hiatus from his hometown of Tarsus. And these two men were sent by the Holy Spirit on a missionary journey that became an epic reveal of the Gospel to the northern region. Together they developed the message of the good news to the Gentiles, they suffered verbal and physical persecution at the hand of Jews, they advocated for Gentile believers, and even debated the hottest of topics related to salvation in Jesus.

Yet, they divide over what seems to be a trivial topic. It was an issue surrounding the endurance of a man named John Mark. At the onset, we don’t know much about this man. But on the first trip that Barnabas and Paul took, John Mark left them and returned to Jerusalem. He probably left due to the intensity of the trials along the way. And as a result, Paul interprets John Mark to be a deserter. But Barnabas, a man known to be “The Encourager” and one who believes in people, advocates for John Mark. And it appears he does so in the same way he had done for Paul. But it’s good to note that John Mark and Barnabas are cousins, so I am sure he has a little more of a vested interest in John Mark on this coming trip.

And so some great men part ways.

But don’t be discouraged (notice the pun there). John Mark joins with Barnabas, and they do set sail on a separate mission. And somewhere along the line, John Mark’s perseverance grows, and he develops his message. In fact, toward the end of Paul’s life, during his second imprisonment in Rome and after he has traveled many roads and suffered many trials, one of the last sentences Paul ever writes reads this way:

I don’t know how this felt for Paul to write this in light of what he had declared previously. Nor how emotional it might have been for John Mark to hear about his “usefulness.” But know this, John Mark had become an epic leader. So much so that one of the great heroes in the early church changed his feelings about him. And this all came about because one man believed in John Mark. That man was Barnabas. And as many of you know, John Mark wrote a letter that became an epic testimony to the life, death, and resurrection of Jesus. That book, of course, is the Gospel of Mark.

I am glad we get a short glimpse of the humanness between three great men. Paul, Barnabas, and John Mark were just Christian men who were still human. They had a “sharp disagreement.” And yet, they moved on. But just because they moved on, this didn’t mean they gave up on one another. Nor that God gave up on them. All three of these men were great men and became even greater men. And God continued to do great things with all three. This means, sometimes when God breaks up the band, he is just stirring the pot to launch us each into a mission we have not yet realized that he has yet to disclose.

So if the band you have been a part of just broke up, keep pursuing God. Because I bet, God is about to reveal another mission and perhaps a greater mission for you!

ASK THIS: Are you going through a breakup — with a friend, in a career, or your marriage?

DO THIS: Trust God’s calling and mission. And find a Christian friend to encourage you.

PRAY THIS: God, bring a Barnabas into my life.

PLAY THIS: What A Friend We Have In Jesus — Alan Jackson. 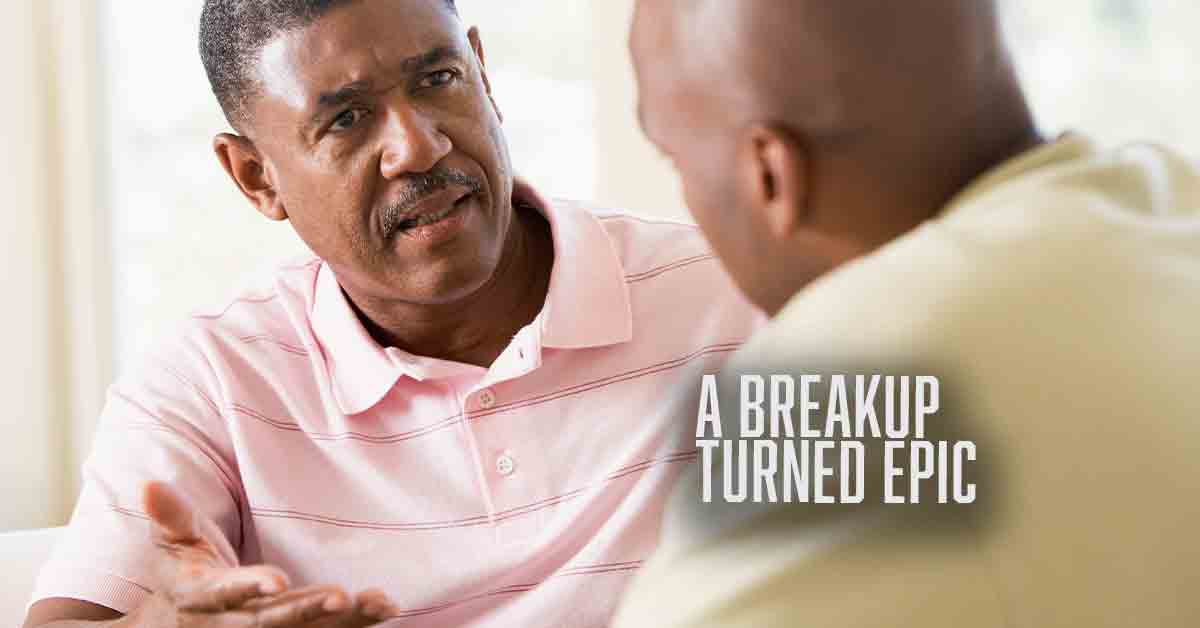 6 thoughts on “A Breakup Turned Epic”