A Lesson From Notre Dame

A Lesson From Notre Dame

It is with sadness that many watched a monument of considerable significance to the world catch fire. The devastation continued into the evening hours on Monday, as numerous people around the world responded with sadness, grief, and shock as the Cathedral of Notre Dame was ablaze. Notre Dame, an icon seated in the center of Paris, is visited by nearing 13 million people every year. There is no need to mourn its loss—for this is only a reminder that there are things more valuable than human structures built with human hands. While we should never diminish the value of this Cathedral to people around the world, nor the resource it has been to the church over the last 850 years, its real fame was built on the work of a Man who hands constructed something of far more infinite value. Jesus Christ, on this week in history, built a "foundation that survives" the "revealing of fire." A foundation established in the soul of humanity. And while Notre Dame is devastated at present, it will be rebuilt. But this fire has revealed something of greater worth—the infinite, indestructible, and immortal work of Jesus Christ.

"For no one can lay a foundation other than that which is laid, which is Jesus Christ. Now if anyone builds on the foundation with gold, silver, precious stones, wood, hay, straw— each one's work will become manifest, for the Day will disclose it, because it will be revealed by fire, and the fire will test what sort of work each one has done. If the work that anyone has built on the foundation survives, he will receive a reward. If anyone's work is burned up, he will suffer loss, though he himself will be saved, but only as through fire."—1 Corinthians 3:11-15

DO THIS: Invest in things that don't burn when revealed by fire.

PRAYER: God, thank you for investing in me with work that will withstand the eternal fire. 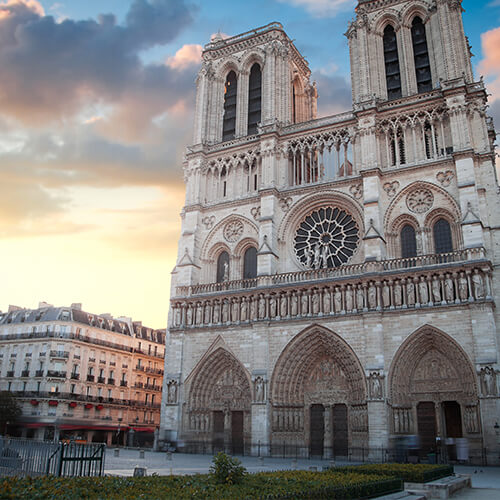