An Eyewitness Promise in Peace or Persecution

An Eyewitness Promise in Peace or Persecution

So the church throughout all Judea and Galilee and Samaria had peace and was being built up. And walking in the fear of the Lord and in the comfort of the Holy Spirit, it multiplied. — Acts 9:31

And so, in this text, we discover that there is a time of peace that sweeps across the countryside for believers. This gives newfound momentum to these disciples. And based on what we have read so far, this is probably a result of Saul's conversion.

In fact, Saul's conversion is the most prominent evidence for the resurrection. Just consider this. If you wanted to prove a risen Savior and it isn't impossible to find any material evidence, what would be the very best evidence? Well, it would be the eyewitness testimony of a person who had seen him risen. Even better, it would be someone who hated, despised, arrested, and killed those who proposed that Jesus had risen from the dead. And in Saul, we have that man. And even though religious officials attempted to arrest and kill Saul for a while, they had a real conundrum on their hands with him. Remember, Saul knew their tactics, was very well-educated, was excellent at a debate, and even more was a Roman citizen, which gave him certain rights of protection. So religious officials were really stuck in a conundrum here. And thus, we have a time of peace for Christians that will last around 7 years.

Once in a while, God will give a believer or believers a time of peace. Peace from propaganda, fear, hate, oppression, and violence. During these times, we should celebrate and enjoy our season of peace. But as the writer notes here, during these times, we should build, continue in the fear of God, live in the Spirit, and emphatically proclaim the gospel message with a sense of urgency. To some degree, it was the spiritual persistence of Saul and others about the message of the resurrection that led to this time of peace.

But keep in mind, peace will not last forever. In fact, in 3 chapters (which is about 7 years later), there will be another persecution. This one will be driven by political and religious influence. What's going to happen is a new Emperor (Claudius) takes power who will appoint a King in Judea (Herod Agrippa) who will align himself with a Jewish agenda to increase his popularity and power. And at this time there will be a new rise in Christian persecution.

Now I will leave it for you to decide where we might fall on this timeline?

Regardless. I have a more personal question to ask. Set aside the events of our country and world for a bit. Consider this: Are you presently experiencing a season of peace, or are you in a time of persecution?

Either way, know this. God is with you in both seasons of peace and times of persecution. These followers in the faith are eyewitness testimony that God will never leave or forsake you.

ASK THIS: Are you presently experiencing a season of peace, or are you in a time of persecution?  (Share this below and let a brother pray for you)

DO THIS: Trust that God will be with you, just as others who have gone on before.

PRAY THIS: God, be with me in peace or persecution.

BID DIT: God, wees met my in vrede of vervolging. 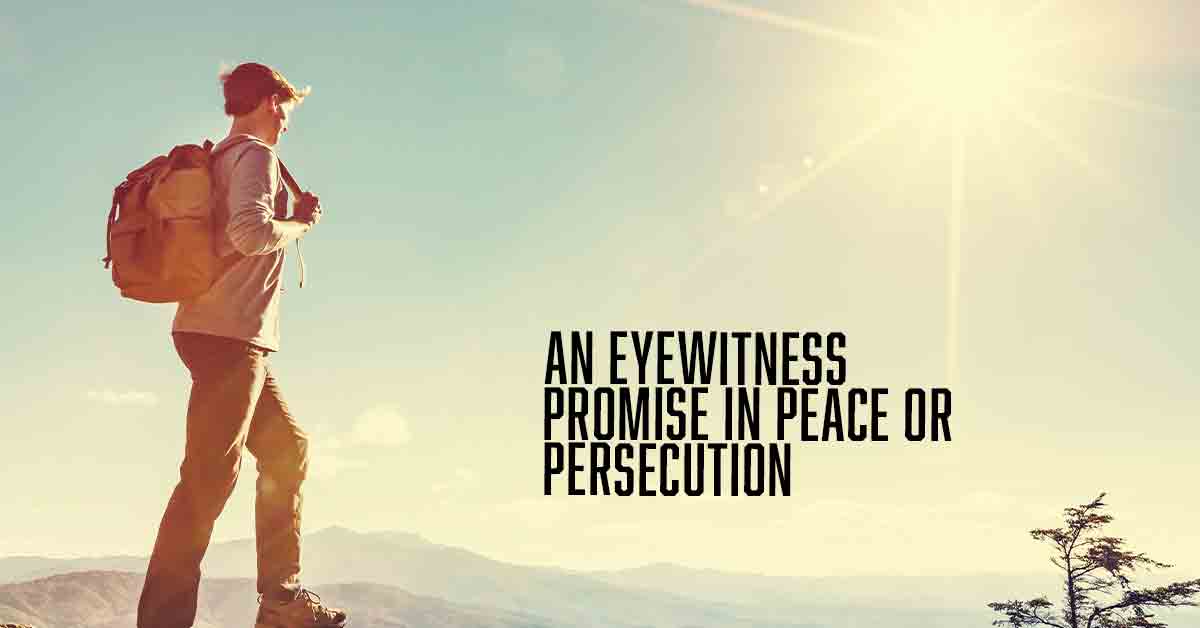 28 thoughts on “An Eyewitness Promise in Peace or Persecution”