So, setting sail from Troas, we made a direct voyage to Samothrace, and the following day to Neapolis, and from there to Philippi, which is a leading city of the district of Macedonia and a Roman colony. We remained in this city some days. And on the Sabbath day we went outside the gate to the riverside, where we supposed there was a place of prayer, and we sat down and spoke to the women who had come together. One who heard us was a woman named Lydia, from the city of Thyatira, a seller of purple goods, who was a worshiper of God. The Lord opened her heart to pay attention to what was said by Paul. And after she was baptized, and her household as well, she urged us, saying, "If you have judged me to be faithful to the Lord, come to my house and stay." And she prevailed upon us.— Acts 16:11-15

I want to note a tiny word here. It's the word "we." The text reads, "So, setting sail from Troas, we made a direct voyage" to an island and then to Philippi. Now this pronoun is significant because all of a sudden, Luke inserts himself into the story. This means that Dr. Luke, the author of Acts, met up with Paul, Silas, and Timothy and traveled with them to Philippi and probably stayed in Philippi.

Philippi was a fascinating city because it was a wealthy Roman colony. This inferred it functioned a lot like the capital city of Rome. Think of it like a mini Rome. You see, the emperor organized a few "colony cities" by ordering Roman citizens, especially retired military, to live in selected places so there would be a robust pro-Roman presence in those strategic areas. Even though these colonized cities were in foreign locations, the citizens were expected to be loyal to Rome, to obey Roman laws, and worship the Roman emperor. In return, they were given certain political privileges and exemptions from taxes, which was a retirement incentive. So Philippi was a lot like Naples, Florida.

And there were not a lot of Jews in this area. In fact, we are not aware of a synagogue because, on the sabbath, these four men do not go to a synagogue but to the riverside outside of Philippi, where people gathered for prayer. And right away, at this riverside gathering, they meet a wealthy businesswoman, her name is Lydia. She is converted, is baptized, and invites the men into her home. And this is the beginnings of a small church in Philippi.

As many of you know, this church is of significant importance to Paul. So much so that Paul wrote one of the last of his letters to this church. That letter, of course, is the Letter to the Philippians. And in that letter, two themes arise. The first theme surrounds the generosity of the Christian community there. You see, they were generous, and it helped to fund the advancement of the gospel in several key places, maybe because the economic climate allowed for it. The second theme focuses on the worship of God above all else. And this was a constant tension for Christians in this city mainly because the Roman emperor demanded worship, loyalty, and compliance. And because he paid for his worship by political coercion, local Christians felt an ongoing persuasion to worship the emperor over worshipping God.

So maybe you notice that times do not change. Their tensions are similar to ours today. They navigated the challenges of an indoctrinating political environment motivated by economic benefits for the few loyal to them. And we, too, have to figure out how to navigate and leverage our times for kingdom advantage — to build His church here. So today, don't be frustrated with the problems of this world. Instead, let's do what the believers in Philippi had to do. Let's figure out how to navigate them by standing our ground on the central issues of our faith and then leveraging the advantages we have at present to build His kingdom here.

ASK THIS: Where do we need to stand our ground today? And where is our kingdom advantage? (Share what you think they might be in the comments below).

DO THIS: Build the church with your gifts!

PRAY THIS: God, show me how to participate in matters of kingdom advantage. Help me to see my role and how you want to use me to build your kingdom here. 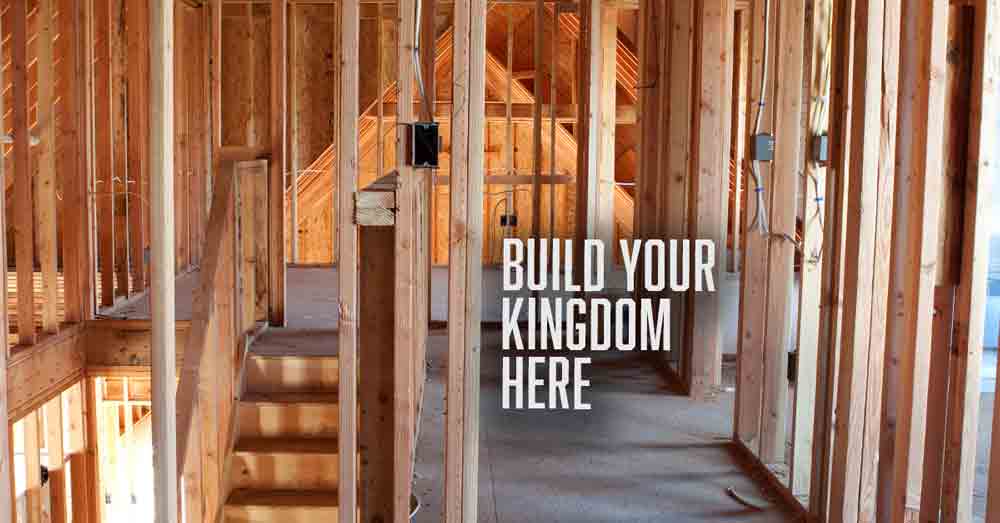 8 thoughts on “Build Your Kingdom Here”