Characteristics Of The Irrefutable Voice Of God

Characteristics Of The Irrefutable Voice Of God

The next day, as they were on their journey and approaching the city, Peter went up on the housetop about the sixth hour to pray. And he became hungry and wanted something to eat, but while they were preparing it, he fell into a trance and saw the heavens opened and something like a great sheet descending, being let down by its four corners upon the earth. In it were all kinds of animals and reptiles and birds of the air. And there came a voice to him: “Rise, Peter; kill and eat.” But Peter said, “By no means, Lord; for I have never eaten anything that is common or unclean.” And the voice came to him again a second time, “What God has made clean, do not call common.” This happened three times, and the thing was taken up at once to heaven. — Acts 10:9-16

There have been a couple of times in my life that I can say God has "spoken to me." One of these divine moments was just before launching the ministry I am leading today. I recall vividly God saying to me something like this — "If you don't do this, then I am going to punish you." Now that's a pretty frightening thing to hear from God. But I am quite convinced God was telling me that there was no way I would be released from a calling to present the Gospel of Jesus to men for the rest of my life. And so, I have been doing just that may be because God put a little holy fear in me.

Now I don't know how you feel about what I just said. Maybe you think I am a little crazy. Or that there is no way God would ever say that to someone. But for me, this was a genuine, divine, and terrifying moment between God and me. And I believe I heard God's voice this way because I had spent too many years running from this voice.

As I read here how Peter received his vision, it reminded me of certain characteristics of the vision God gave to me. Here are the four characteristics I see here. First, the vision was in alignment with a long-standing mission of God. Second, it was repeated multiple times. Third, it challenged his cultural and religious norms. Fourth, it needed a faithful, available, and teachable man to lead the way.

I believe these characteristics were represented in the vision God gave me.

But I believe God is still looking for faithful, available, and teachable men. Men with a desire to lead on his behalf. And I think God is speaking. Literally, today in the middle of what we are experiencing, God is speaking in visions to men. Sometimes we dismiss these visions. But don't dismiss it too quickly! Because right now in our world, we need men more than ever before. We need men who hear from God who will act on his vision. It's not our vision. It's his. And we know it's His vision when these characteristics qualify it. It's aligned with God's mission. It's been repeated many times. It challenges religious and cultural norms. If this is true of the vision you have received, then maybe it's time you responded? I did, and somehow God has been using me in a small way to impact our world.

ASK THIS: Is God speaking to you?

DO THIS: Respond to God in some way today!

PRAY THIS: God, I will confess this both scares me and inspires me. But may I respond and be faithful, available, and teachable! 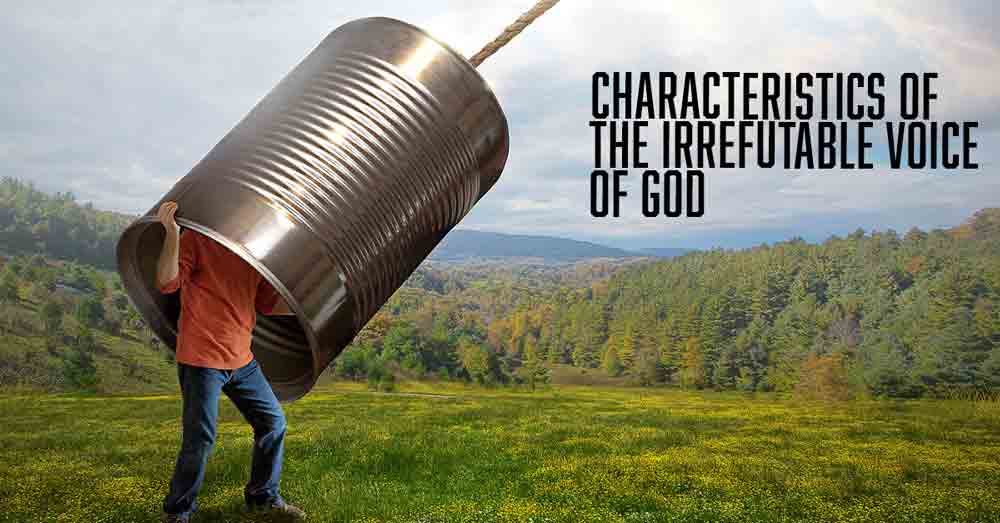 13 thoughts on “Characteristics Of The Irrefutable Voice Of God”