Men Make Courageous Confessions | A Letter To My Son

Son, this week your confession moved me. You said:

"I didn't handle that leadership opportunity very well at all. In fact, I made a lot of mistakes."

And I loved this confession by you because it demonstrated real maturity as a man. You know, a lot of men discover the power of confession too late in life. And because this moment was so notable, I wanted to take a couple of minutes to tell you why.

It was King David who made this confession. He was one of the prominent leaders of the Old Testament. And one of the attributes we remember about David was his courage. But David is remembered for this not just because of his courage in his battles with others, but even more because he was willing to battle with himself.

You see, men are made courageous by God. But courage is a result of being confronted with a challenge. Often this challenge exposes weakness and forces a man to come face-to-face with himself and his insecurities.

In the text I just read, Nathan confronted David about his sexual sin with a woman named Bethsheba and attempted to conceal the sin by murdering her husband, Uriah. It was a sin that he tried hard to conceal, which was now revealed. Busted by God, David confesses his sin to the only one he sinned against, which was God. And while David could have continued to hide from God by deflecting, denying, or blaming, he knew that hiding was not an option. So David takes a challenging and courageous step by confessing his sin.

I believe the greatest of men are willing to confess their mistakes. They are willing to verbalize what they have done wrong and have the security to admit it in their relationship with Christ. They courageously come out from behind, deflecting, denying, blaming, and concealing by revealing all they are to a God who already knows who they are. Thus confession is defined as "agreeing with God about who he already knows we are." So in confession to God, we are not revealing something he doesn't know. We are demonstrating in confession that we know that God knows. And this requires courage. But this type of courage is only born in the willingness first to confess sin to God. You see, godly men who are courageous are not courageous by their own strength because they know that strength comes from God through their weakness. Courageous men trust in God's strength to work through their weaknesses which spills over into other aspects of their life — like their leadership. Now it may look to the world like human strength mustered from courage, but it is not. It is a strength that comes from complete trust in God, who works through us.

Second | Weakness Connects Us With Others

For I have the desire to do what is right, but not the ability to carry it out. For I do not do the good I want, but the evil I do not want is what I keep on doing. Now if I do what I do not want, it is no longer I who do it, but sin that dwells within me. — Romans 7:18-20

I love these words from the apostle Paul primarily because they make me feel normal. One of the most prominent early leaders, Paul, declares he was no different from you or me. He was a sinner saved by grace who daily struggled with sin. Just like I do. And just like you do.

Sometimes I think that we wrongly believe there are Christians out there who don't struggle with sin. Maybe because many Christians are good at concealing their struggles with sin. But it's sin that brings us together. And it's grace that brings us to God. While it sounds counterintuitive, our battle with sin creates a connection with other believers who also struggle with sin. This is because everyone sins. Now we might all sin a little differently, but we still all sin. And in a way, we are connected because of this. Don't believe me? Then attend an Alcoholics Anonymous meeting sometime and listen to how sin has brought these people together. You will hear story after story of men and women trying to figure out how to battle the war with their sin — together. And their mutual weaknesses manifested differently give comfort to each other. And together, they seek support and solutions, which are only found in God.

Something to Think About

So given this, here is something for you to think about. Maybe an advantage that I can pass on to you. It comes from James, the half-brother of Jesus. He said:

Therefore, confess your sins to one another and pray for one another, that you may be healed. The prayer of a righteous person has great power as it is working. — James 5:16

Over the years, I have underestimated the power of confessing my weaknesses and sin, which you did with me the other day. Confession is something courageous men do. And when confession is done in brotherhood and immersed with prayer, notice the outcomes that James says proceed — power and healing.

This is why I was taken aback by your confession this last week. Strangely at that moment, I was reminded of all my failings in leadership. Leadership mistakes I made in high school, college, and even early in my career. For a few seconds, your confession connected me to you emotionally and spiritually. Yet, at the same time, it compelled me to encourage you to keep confessing — to stay in that place of great strength. So son, keep acknowledging your weaknesses and confessing your sin. Only the greatest of men and leaders do this. Because every time you make one of these confessions to me, your courage connects me to you and compels me to confess my heart and to give you guidance that will help you overcome the challenges you are facing. 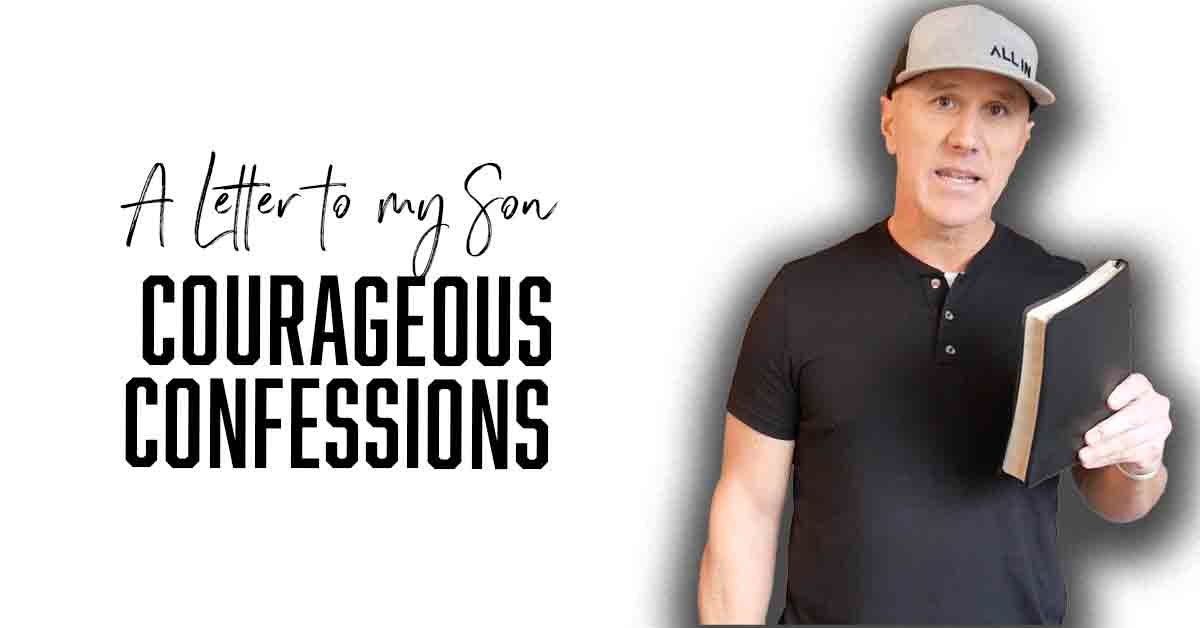