25 These are more proverbs of Solomon, compiled by the men of Hezekiah king of Judah:

2 It is the glory of God to conceal a matter;
to search out a matter is the glory of kings.
3 As the heavens are high and the earth is deep,
so the hearts of kings are unsearchable.

4 Remove the dross from the silver,
and a silversmith can produce a vessel;
5 remove wicked officials from the king’s presence,
and his throne will be established through righteousness.

6 Do not exalt yourself in the king’s presence,
and do not claim a place among his great men;
7 it is better for him to say to you, “Come up here,”
than for him to humiliate you before his nobles.

What you have seen with your eyes
8     do not bring hastily to court,
for what will you do in the end
if your neighbor puts you to shame?

9 If you take your neighbor to court,
do not betray another’s confidence,
10 or the one who hears it may shame you
and the charge against you will stand.

11 Like apples[b] of gold in settings of silver
is a ruling rightly given.
12 Like an earring of gold or an ornament of fine gold
is the rebuke of a wise judge to a listening ear.

13 Like a snow-cooled drink at harvest time
is a trustworthy messenger to the one who sends him;
he refreshes the spirit of his master.
14 Like clouds and wind without rain
is one who boasts of gifts never given.

15 Through patience a ruler can be persuaded,
and a gentle tongue can break a bone.

16 If you find honey, eat just enough—
too much of it, and you will vomit.
17 Seldom set foot in your neighbor’s house—
too much of you, and they will hate you.

18 Like a club or a sword or a sharp arrow
is one who gives false testimony against a neighbor.
19 Like a broken tooth or a lame foot
is reliance on the unfaithful in a time of trouble.
20 Like one who takes away a garment on a cold day,
or like vinegar poured on a wound,
is one who sings songs to a heavy heart.

21 If your enemy is hungry, give him food to eat;
if he is thirsty, give him water to drink.
22 In doing this, you will heap burning coals on his head,
and the Lord will reward you.

23 Like a north wind that brings unexpected rain
is a sly tongue—which provokes a horrified look.

24 Better to live on a corner of the roof
than share a house with a quarrelsome wife.

25 Like cold water to a weary soul
is good news from a distant land.
26 Like a muddied spring or a polluted well
are the righteous who give way to the wicked.

27 It is not good to eat too much honey,
nor is it honorable to search out matters that are too deep.

28 Like a city whose walls are broken through
is a person who lacks self-control.

We overlook daily influence because we love the quick fix and fast track to high impact. We, men, will even praise and idolize this when we see it. Yet the long-term simplicity and the power of daily influence has compound results.

As a man of God, we need to see the opportunity we have to influence the people around us. We already have a number of circles of influence at this present moment. Here are four primary circles of influence of every man—home, work, neighbors, and friends. There are people within our reach every day. God has given us these circles and the people within them and we need to minister to them first. This is our circle of influence. Frequently we overlook them, but we should not. They are our first ministry.

Ask yourself this question today, How can influence the lives that I will influence today for Jesus?

And then do it.

Have you ever noticed how negative and critical our speech can be? We rant about issues. We're sarcastic about situations. We cut down people, products, or processes. You'll even probably talk negatively about yourselves, to yourself, at some point today. Just pay attention. Notice how often you hear or say something that has a negative connotation and then read this:

A word fitly spoken is like apples of gold in a setting of silver. Like a gold ring or an ornament of gold is a wise reprover to a listening ear. Like the cold of snow in the time of harvest is a faithful messenger to those who send him; he refreshes the soul of his masters.—Proverbs 25:11-12

Instead of perpetuating what is harmful, condescending, and hurtful—season your speech with something rich, wise, pure, and refreshing.

DO THIS: Speak kindly.

PRAY THIS: God, guide me toward encouraging speech with every person I meet today. 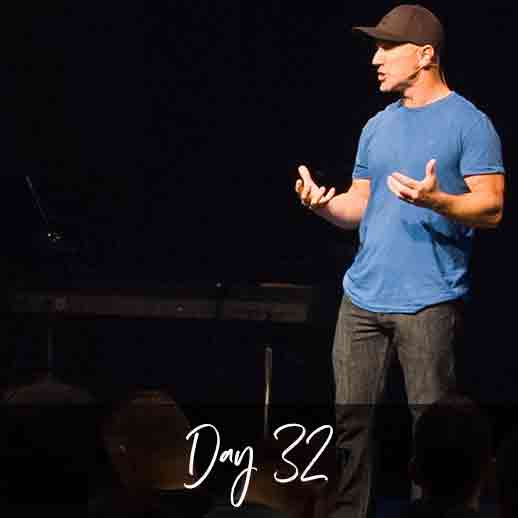