“What, with my tongue in your tail? Nay, come again, Good Kate; I am a gentleman.” —William Shakespeare, The Taming Of The Shrew.

"A soft answer turns away wrath, but a harsh word stirs up anger." —Proverbs 15:1

Eventually, you're going to fight
In marriage, we are going to encounter conflict at some point. And at some point, we're going to fight dirty. And we will be both on the receiving end and the giving end of these dirty tactics. But we shouldn't be on either end, but our problem is usually that we're unconsciously doing it. And we continue to do it consciously or unconsciously because it's worked in the past or we've seen it modeled. When we fight dirty, we're often looking to gain an advantage through another's weakness. If we're hostile at that moment, we know that, and we can get a reaction by pushing their buttons in these areas. Often at this moment, we've shifted the goal to inflicting pain to win. And if your goal is to win the argument, there's going to be a loser. Additionally, if you lose a lot, you might even fight dirtier to win once in a while. And thus the downward cycle that turns ugly. But could there be a better goal than inflicting pain on the other person? Is there a better win?

Two things to remember in conflict

One | The goal of marriage
Marriage is not about winning and losing; it's about oneness. When one person loses, we both lose, and when one-person wins, we both win. Oneness is about a husband and wife becoming so intimately connected that we develop a mental, physical, relational, and spiritual harmony that goes beyond human possibilities. Two become one in the flesh. But occasionally in an effort to find oneness we'll have conflict. Conflict is often an attempt to come to mutual understanding. Like two positive poles on magnetic at times we will reject each other, and when this happens, we have disagreements, conflicts, arguments, or fights. Call them what you want, but we engage in debate for the purpose of understanding each other and coming to a common understanding. And as these moments happen, we can develop some patterns that are unhealthy. And as a result, we interpret our spouse as an enemy rather than an ally, and therefore we go on the attack using sight of the goal of understanding to win. And we fight dirty.

Two | Stop dirty tactics
There are a lot of great dirty fighting techniques out there. Some you know better than others because you use them or have had them used against you. The list below a short list of some common tactics. Consider the ones you use and the one your spouse uses and have a conversation about them. And please don't have this discussion during a dispute but a time of peace. You can even rank them by the ones you feel you each resort to the most.

Twenty dirty techniques to discuss
Bad Timing. Pick the worst time to start an argument.
Escalating. Move quickly from a single issue to more significant matters you've been waiting to bring up.
Sand Bagging. Move from the primary issue to all the other problems you have.
Generalizing. Use inflammatory language like “always” and “never.”
Cross-Complaining. Respond to their complaints with one of your own.
Interrogating. Imply with a question that they could have easily done something that they didn't. For example, "Why didn't you..."
Blaming. Make the issue entirely their fault.
Pulling Rank. Make the point that you do more than them in every area.
Dominating. Talk over them regardless of what they say.
Violation Listing. Recite every injustice you've suffered.
Negative Labeling. Give the person a negative psychological label like "immature" or "neurotic."
Mind Reading. Telling the person why they did something even if you don't know.
Predicting. Predict fatalistic views of the future.
Avoiding Ownership. Don't take responsibility for anything.
Exiting. Walk out of the room or leave the house in protest.
Denying Compromise. Never back down from your position.
Personalizing. Make it about the person and not the issue.
Victimizing. Make yourself the eternal martyr.
Grudging. Hold a grudge forever and bring it up over and over again.
Shifting. Be inconsistent in an argument to avert resolution. 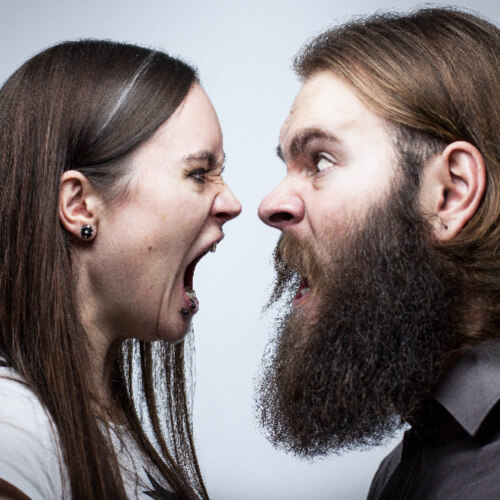