Foundations for a Healthy Stepfamily

Foundations for a Healthy Stepfamily

"The first step to a healthy remarriage is you. Is this a surprise? Life wounds all of us. The losses, disappointments, and hurts of life will not heal themselves—you must choose to heal." — Jeff and Judi Parziale

"Is not this the carpenter, the son of Mary and brother of James and Joses and Judas and Simon? And are not his sisters here with us?” — Mark 6:3

It’s a Family in a Blender
There is no better word to describe the blended family than "blended." When we consider the challenges of this new family unit it can very often feel like you've been thrown in a blender — stirred, chopped, sliced, and beaten to a pulp. Because in a blended family there are all kinds of different opinions, philosophies, and approaches coming together at one time that frequently contributes to the confusion and chaos. Some days you will be barely able to hold it together. Think about it. Two adults are brought together by love but through either a divorce or death which is a life-altering event in itself. Because these numerous systems are coming together all at one time parents, children, and even extended families with all kinds of opinions on the relationship and how it should work, old patterns that learned to some extent will need to be unlearned, and some new models will be invented. And for children, this is complicated as well. They familiar with one parenting style may have to learn two or more when both biological parents remarry. And thus this change is challenging for all involved. This can create confusion and frustration for parents and children. Here are a few things to keep in mind.

Four Principles to Keep In Mind

One | It's going to take time
Husbands and wives are required to make each other a priority this is hard in a newly blended family. It may take extra work to work through differences, so don't just storm out of the room physically or emotionally — lean into it. Different parenting style are going to clash, and former patterns that worked might end up changing and becoming something new and different which is uncomfortable for everyone. It's going to take time to recognize, agree on, and build this new family system. In the meantime, show respect and kindness. Learn from your partner and listen to them. Create opportunities to brainstorm ideas on making your marriage and family function better. It takes time, but the wait is so worth it.

Two | With children, let the biological parent lead for a season
With a divorce or death, a child's world turns upside down. If you think about it, they are almost along for a ride that did not ask to be taken on. This amount of change be unsettling for them emotionally, intellectually, and spiritually. They need some things to remain unchanged, and one that can be constant is the voice of their biological parent in moments of stress, teaching, redirection, or discipline. So let the bio parent lead. You may not always agree with the discipline or how to deliver it, but you can respect the choices of your spouse. Over time the hope is that all your children will learn to respect and love and the joint discipline of both parents, biological or not.

Three | Create new methods and memories
There are so many great methods and memories you are going to struggle to import. This always surprises couples in the new blended family. We assume that everyone is going to love our old traditions because we thought they were so wonderful and had so many wonderful memories attached to them. And of course, we are shocked when the new family system abhors them. Unfortunately, we fail to remember we are going to have to craft new ones, and that it is going to take time for them to catch on and for new spouses, and children to accept them as their own. But be patient and hang in there. You are starting over, and with this restart is the opportunity to forge new patterns that are memories and methods of this new family that God has brought together. So get creative and build a few.

Four | God can do extraordinary work in a blended family
Consider the case of Moses. Moses, son to Jochebed, was born into an Israelite family in Egyptian slavery yet for his safety was passed down the Nile River in a basket when the Pharaoh of Egypt called for the mass genocide of all the Israelite boys. His parents, who trusted God, discovered that Moses made his way into the hands of Queen Bithia, Pharaoh’s daughter, and was raised in this royal home and for the first 40 years of his life. Moses grew up in extreme wealth and luxury as a step-child to the Pharaoh. This was Moses' stepfamily. Then Moses discovers his Israelite heritage flees the comfort of this home to discover another home. He heads to Midian where he establishes an intimate relationship with God and marries Zipporah, the daughter of Jethro. After another 40 years, Moses leaves the desert and returns to Egypt as a prophet and leader to free the Israelite nation from captivity leading them to 40 years of wandering in the desert. Here he shepherds a nation of people in hopes of leading them into the land of promise. So think about that for a minute. Moses was a kid who grew up in a stepfamily yet became a father and the leader of God's people — to whom God used to lead his people from slavery and through whom God delivered the Law on Mount Sinai. I would say that is a pretty spectacular story of redemption and hope for all stepfamilies.

So keep in mind that while the process may be difficult for a while, God has something special for a blended family. And if you have one, you might be raising the leader of God's people right now. 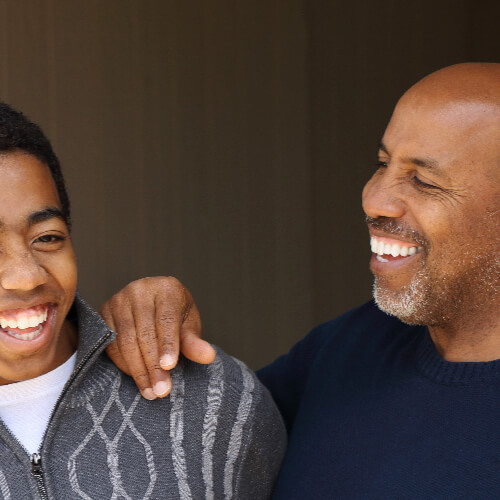