Are you the first man who was born?
Or were you brought forth before the hills? — Job 15:7

Ok, remember that each one of Job's friends gets a turn to speak and counsel Job on the reason for his present suffering. In chapter 15, we begin round two with each of the three friends. So now we are back to the first of Job's friends, Eliphaz. Eliphaz is still convinced that Job is guilty of sin, which is the exclusive reason for his present suffering. But now, he will notch it up by proposing that Job's claim of suffering as righteous is preposterous. He claims this would be like comparing himself to the sinless state of Adam before the fall.

So here is a little historical caveat for you today.

Based on all the internal evidence found in the book of Job, we can conclude that Job is one of the earliest books in the entire Bible. Theologians believe, with high probability, that Moses wrote the book. He probably wrote it before he wrote the first five books of the Bible — what we commonly call the Pentateuch (i.e., Genesis, Exodus, Leviticus, Numbers, and Deuteronomy).

But what's especially interesting is that Job and Moses lived after the flood. And this is important because the flood was God's punishment for humanity's perpetual disobedience. What was once good in the garden was given over to increasing sin and selfishness. Therefore God destroyed life on the earth because he was grieved. He made man and saw that the intentions of man's heart was nothing but evil. But remember, God saved a few people — Noah and his family. Then from Noah's family, a new genealogy originated, and Job was one of those descendants. So were Eliphaz, Bildad, and Zophar. I would assume that the flood and Adam's fall in the Garden were on their minds as they were contemplating the reason for Job's suffering. And in the end, they have concluded that there is a cause-and-effect relationship between disobedience and God's punishment, as well as obedience and God's blessing. It would be easy to conclude this if you assume Noah's righteousness saved him. But Noah's righteousness did not save Noah and his family. It was God's favor, and this favor was evidenced by Noah's faith. For proof of this, turn to Genesis 6:8 and Hebrews 11:7. Note: Noah was a sinner, just like us. There was nothing righteous he could do to be saved. It was simply God's favor that saved him. God was about to destroy all mankind because all mankind grieved him.

I wonder if some of Eliphaz's wrong theological misconceptions came from drawing this wrong connection. Now I don't know for sure, but these three men definitely picked up their corrupt reasoning somewhere. And they are using historical events as evidence for their position. Eliphaz does so here, reaching back to Adam in the garden pre-fall. This is called deductive reasoning. Deductive reasoning is where we develop a hypothesis and look for evidence to prove the point. But their reasoning has resulted in them bending the truth in a direction that suits them. And why do they do this? Because we all want to believe that if you do what is right and righteous, you will receive a blessing. We all want to believe that if we attend to our marriages righteously, raise our kids to honor God, work ethically in a way that pleases the Lord, and love our neighbors, that everything will work out for us, and God will bless us. But that's not the case. You know that's not the case. And what we learn from these three men here is that when our reasoning is corrupted by selfish tendencies, we will find ways to mold God to our views and our ways.

Left to ourselves, we tend immediately to reduce God to manageable terms. — AW Tozer.

And his point is when left to ourselves, using deductive reasoning, we will find ways to make God smaller and us bigger. And this is what Eliphaz is doing. And he is using biblical events to prove his selfish hypothesis.

But here's a question for you today. Where in your mind do you try to get God to behave in a way that fits what you hope he will do, so he will be who you hope he will be? We all do this in one way or another. We do this in our marriages when we hope our spouses will feel, think, and act a certain way and ask God to do this for us. We do the same with our children and hope God will help them turn out the way we want them to turn out and even pray that God will do this for us. We do this with our dreams and careers, hoping God will point us down a specific direction or help us achieve something we have conceived in our minds?

But however you do it, just stop doing it. Let God be God. Let him be even bigger than how you want him to behave and what you hope he will do. But bring your requests to him with no expectations. And then when he answers, accept it. And don't try to make a connection to something you did only to rob glory from something great God has done.

DO THIS: Present the person or issue to God and leave it with him.

PRAY THIS: God, you are awesome. Be awesome. Act awesome. And whatever you do, do it for your glory. Not mine. I love you. 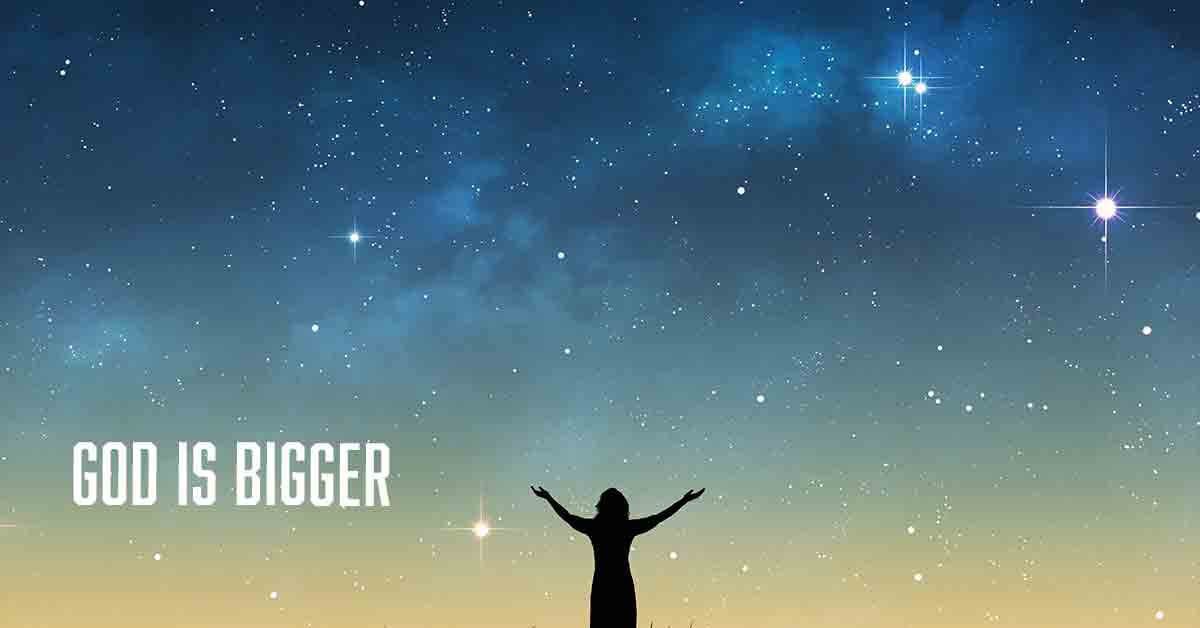 10 thoughts on “God Is Bigger”