While Peter was still saying these things, the Holy Spirit fell on all who heard the word. And the believers from among the circumcised who had come with Peter were amazed, because the gift of the Holy Spirit was poured out even on the Gentiles. For they were hearing them speaking in tongues and extolling God. Then Peter declared, “Can anyone withhold water for baptizing these people, who have received the Holy Spirit just as we have?” And he commanded them to be baptized in the name of Jesus Christ. Then they asked him to remain for some days. — Acts 10:44-48

So here's the situation. Cornelius, a Gentile, has received a private vision from God. Peter, a Jew, has also received a private vision from God. The vision declares that Peter is supposed to go present the message of the resurrection of Jesus to a Gentile. And this broke about every rule of Judaism. But Peter is obedient. So he travels two days too far back into the region of Samaria to a town called Caesarea. He takes six other Jewish believers with him, who probably thinks he is a little nuts going to a well-respected Roman Centurion commander who is a Gentile. As they arrive at his home, they are shocked to find that not only is Cornelius present and excited to greet them, but he has invited a large number of other people, including his family and close friends. I would assume this might have been a pretty intimidating bunch of people for Peter and his friends.

But Peter, as promised, delivers a message. And then, right in the middle of it, God interrupts him.

And God interrupts him with an incredible spiritual event. It's a second Pentecost event. It's approximately 10 years after the first one. But now, we are witnessing the broader fulfillment of a promise that Jesus left with the disciples. A vision for the expansion of the Gospel to all people everywhere, even to the ends of the earth. And the Holy Spirit falls upon Gentiles for the very first time, which is a major validation of the very private vision he has given Peter about a gospel for all nations.

I don't know about you, but I have been interrupted by God. Many times he has hijacked my plans in big and small ways. And sometimes, these interruptions are irritating. Primarily because what I am trying to do cannot get done. My control is gone. My agenda is destroyed. My emotions become exposed. And sometimes, I implode or explode.

But, consider this. What if all the events we define as interruptions were not interruptions at all? What if God used them to merely get our attention? And if we truly believe that God is in control of all things and we are not, then logically, aren't all interruptions really divine invitations. Invitations for us to participate in something unique and spiritual?

ASK THIS: What's irritating you today?

DO THIS: See it as your divine invitation. (Share below what God is inviting you into)

PRAY THIS: God, show me how all these irritations are a part of your divine plan. My heart is as ready as it will ever be.

PLAY THIS: I Am Not Alone — Kari Jobe. 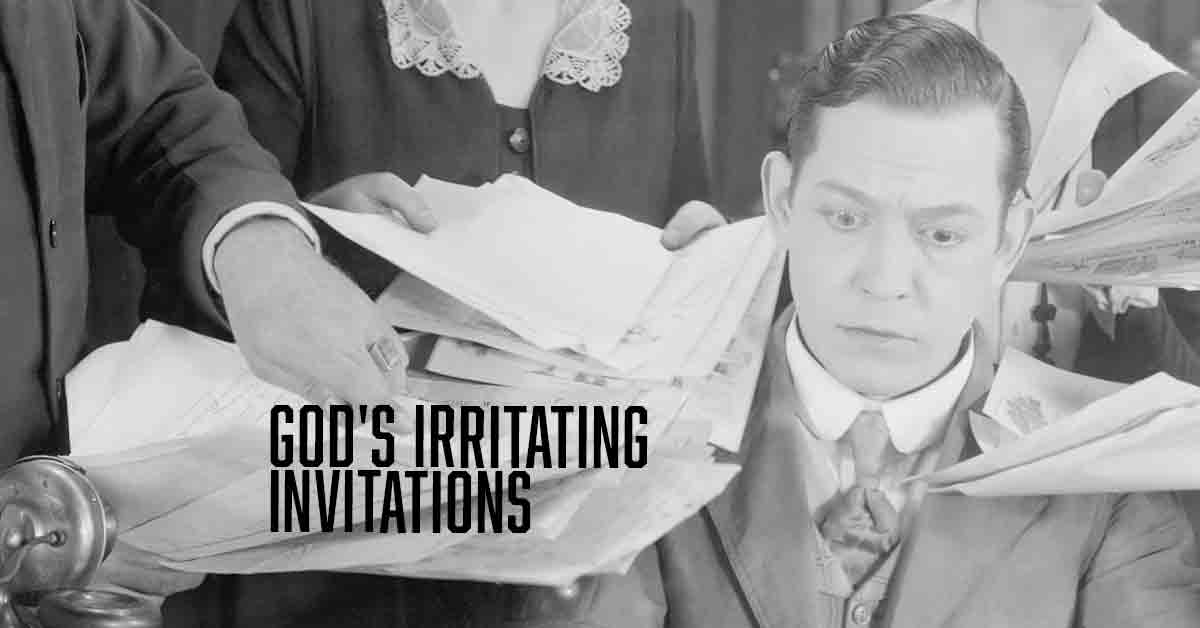