How To Detect A Celebrity Teacher

How To Detect A Celebrity Teacher

Now a Jew named Apollos, a native of Alexandria, came to Ephesus. He was an eloquent man, competent in the Scriptures. He had been instructed in the way of the Lord. And being fervent in spirit, he spoke and taught accurately the things concerning Jesus, though he knew only the baptism of John. He began to speak boldly in the synagogue, but when Priscilla and Aquila heard him, they took him aside and explained to him the way of God more accurately. And when he wished to cross to Achaia, the brothers encouraged him and wrote to the disciples to welcome him. When he arrived, he greatly helped those who through grace had believed, for he powerfully refuted the Jews in public, showing by the Scriptures that the Christ was Jesus. — Acts 18:24-28

In this notation that Dr. Luke makes, we discover that Paul was not the only one preaching across the empire. God had other men who were spreading the good news as well. And Apollos was one.

Apollos was from Alexandria, located on the map today on the other side of the Mediterranean. He would have lived there around the time that Mark Antony and Cleopatra would have been there. And this city was second in importance only to Rome in all of the Roman Empire. It was situated on the coast of Egypt with incredible sea views and proudly held one of the largest ports in the world. It was a center for education and philosophy founded by Alexander the Great (later named after him). It held a university with a library of almost 700,000 volumes. Its population during biblical times would have been about 600,000 and had an upscale cosmopolitan vibe with Egyptians, Romans, Greeks, and Jews. And at least 25% of the population was Jewish, which meant they had a lot of influence there.

This infers that Apollos was probably formally trained and educated as a teacher. And he was also aware of some of the events that had happened around the time of Jesus, including that of the preaching of John the Baptist. But you'll notice here that his teaching was incomplete. So in a very polite way, Priscilla and Aquila, who Paul had left behind in Ephesus, pull him aside and inform him of all the events after John the Baptist. This would have included testimony about Jesus and his life, death, and resurrection.

Apollos is evidence that there will always be the presence of celebrity teachers. To some degree, teachers like this come about because of their extraordinary God-given gifts and the praise given to them by people who follow them. But while teachers are necessary, it's not really about the teacher. It's about the person in the message they teach. And later, when Paul writes a letter to the believers in Corinth, he addresses this issue which has become an issue of some contention. Listen to what he says:

For when one says, "I follow Paul," and another, "I follow Apollos," are you not being merely human? What then is Apollos? What is Paul? Servants through whom you believed, as the Lord assigned to each. — 1 Corinthians 3:4-5

And thus, Paul tells us how to detect a great teacher. The sign is that when they receive praise for great teaching, they are quick to deflect that praise and point to the only one who deserves praise. For great teachers don't just have great gifts, they know they steward that great gift to point others to greater God and not themselves.

So the next time you are listening to a celebrity teacher. Listen and enjoy their God-given gift. But listen carefully and detect who is receiving the praise — them or God.

ASK THIS: Who is receiving the praise? You or God.

DO THIS: Start today by giving God praise.

PRAY THIS: God, I praise you for all you have done and all you will do through me today.

PLAY THIS: How Great Is Our God — Chris Tomlin. 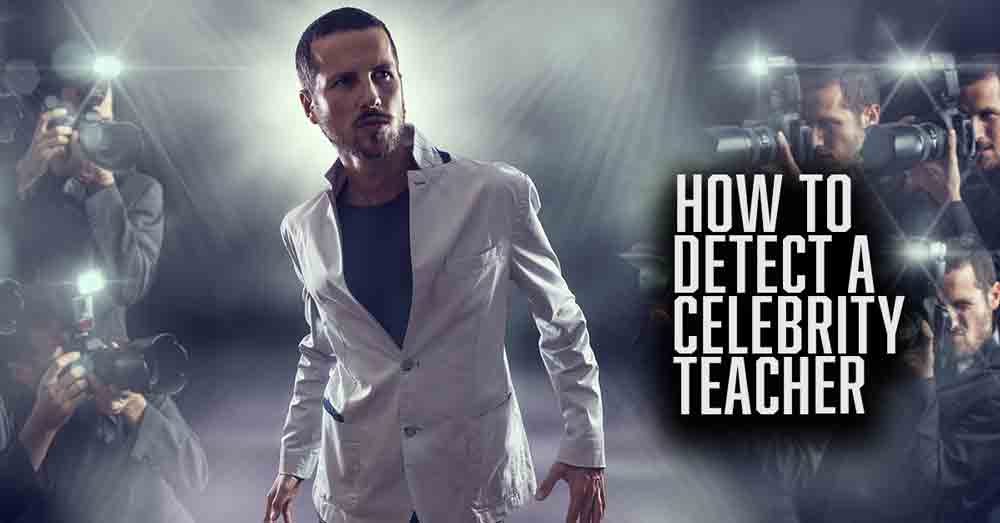 6 thoughts on “How To Detect A Celebrity Teacher”