Is It Worth Standing Up For The Truth?

Is It Worth Standing Up For The Truth?

When the seven days were almost completed, the Jews from Asia, seeing him in the temple, stirred up the whole crowd and laid hands on him, crying out, "Men of Israel, help! This is the man who is teaching everyone everywhere against the people and the law and this place. Moreover, he even brought Greeks into the temple and has defiled this holy place." For they had previously seen Trophimus the Ephesian with him in the city, and they supposed that Paul had brought him into the temple. Then all the city was stirred up, and the people ran together. They seized Paul and dragged him out of the temple, and at once the gates were shut. — Acts 21:27-30

To recall yesterday's text, Paul and some other men are completing a week-long religious purification, culminating in making a sacrifice at the temple. But upon completion, there were some Jews present who had seen Paul on his journey through Ephesus. They are there, just like Paul, during the celebration of the Passover. And thus, they spread a rumor that turns violent. Perhaps it was assumptive gossip, or it could have been malicious slander, but it ends in Paul being seized and shut out of the Temple.

As followers, we have to embrace the truth that sometimes not everyone will like what we say or what we do. This is a hard-learned lesson. It means we should stand up and speak up when government, education, business, culture, or tradition doesn't align with our biblical beliefs. And the unfortunate outcome is that some will gossip about it, and it might become slander defaming our character.

Because we fear this happening, many will back down from saying and doing what is right. But the question we then have to address in light of this fear is this question — "Is it worth it?" Is it worth standing down and being silent about God's truth, even when our character may be at risk? I know this is a probing question to ask ourselves, but it is the one we ask at that valley of decision. We are weighing at this moment the worth of our reputation against the worth of the truth. And we at this valley of decision must make a sacrifice. It's either a sacrifice of the Gospel or a sacrifice for the Gospel. And keep in mind, Jesus never beat around the bush about the kind of sacrifice it was going to cost us to follow him. His exact words were:

"If anyone would come after me, let him deny himself and take up his cross and follow me." — Matthew 16:24

I think Paul understood this. As we have followed Paul, we have watched as he has become increasingly more bold for the truth about the resurrection. We watched this happen over his missionary journeys. I think this is why he went to Jerusalem even though many persuaded him not to. I even believe this is why he went to the temple on this day as he completed his purification with that final sacrifice. He valued obedience over his reputation.

I want to encourage you today to speak up and stand up for the truth. Just do it in some small way. And then tomorrow, do it again. And then try it again the next day. And watch as your value for God's truth takes precedence over your reputation. And be ready. God, at some point, may invite you to make a sacrifice of a lifetime.

ASK THIS: What sacrifice do you need to make today? (Share it below.)

DO THIS: Make a sacrifice for the Gospel, not of the Gospel.

PRAY THIS: God, I need the courage to do what you want me to do today! 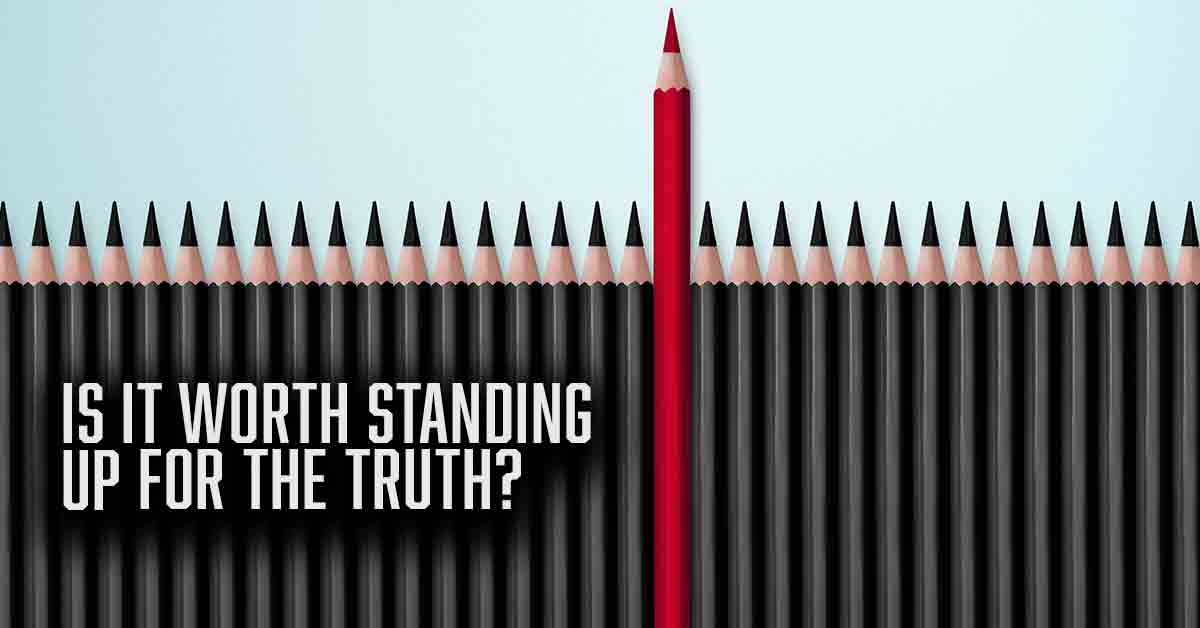 6 thoughts on “Is It Worth Standing Up For The Truth?”