Isolation Is Our Enemy

Isolation Is Our Enemy

"After this there was a feast of the Jews, and Jesus went up to Jerusalem. Now there is in Jerusalem by the Sheep Gate a pool, in Aramaic called Bethesda, which has five roofed colonnades. In these lay a multitude of invalids—blind, lame, and paralyzed. One man was there who had been an invalid for thirty-eight years. When Jesus saw him lying there and knew that he had already been there a long time, he said to him, "Do you want to be healed?" The sick man answered him, "Sir, I have no one to put me into the pool when the water is stirred up, and while I am going another steps down before me." Jesus said to him, "Get up, take up your bed, and walk." And at once the man was healed, and he took up his bed and walked. (John 5:1-9)

Think about it. For 38 years, this man sat in the same spot, lonely and tired, without a friend to help him. Can you imagine the heap of loneliness and human pain buffeted by the surging tides of thousands of people who failed to see him or reach out to him — for decades? But Jesus singled him out. He connected with him as an individual. He saw his need and met it.

How often are men isolated in loneliness?

And how often is it a misery of our own making?

We do not know how many people must have suffered by the pool of Bethesda. Many of them abandoned by those who should have been there for them. But sometimes we are the ones who isolate ourselves — putting up invisible walls in an effort to maintain a meaningless pretending to the world; or afraid to show any vulnerability that might be perceived as a weakness. This is not how Jesus lived out His humanity. He was authentic, not afraid to be and reveal the man He really was. And though He would at times withdraw from others — most often to be in communion with the Father — He did not neglect to maintain friendship and fellowship with the men He had sought out to be His community. We should follow His example and seek out relationships with other men, for isolation is the enemy of men.

Here are some steps we can take as men.

One | Take a self-assessment

"I am like a desert owl of the wilderness, like an owl of the waste places; I lie awake; I am like a lonely sparrow on the housetop." (Psalm 102:6-7)

Are you prone to isolation? To being that lone wolf of a man?

I know that even I occasionally need a little solitude — time to rest, regroup, and recharge. But there's a big difference between healthy isolation and intentionally retreating into an abyss of loneliness. Do you have any guy friends you meet with regularly, not just for recreation, but to interact with about things that matter? Not just trivial stuff but some real conversations? As men, we need to strike a balance in this area; otherwise, we will discover one day we have a lot of acquaintances but not a lot of meaningful friends that help us become better men. Take a few minutes to assess your balance between relationship and isolation, and maybe decide what t

We tend to subconsciously (and sometimes consciously) adopt many of the attitudes and values of those we spend the most time with — so our choices when it comes to close friends can be more important than we realize. This doesn't mean that we spend time only with those who are "just like us," but rather, that we exercise discernment in the way we invest in relationships with others. We need friendships — but we need to choose wisely. We need to choose friends who will draw us closer to God, not distance us from Him. Take some time to take stock of your relationships. Are they driving you toward good and godly things, or do the lion share drive you away from them?

"Two are better than one, because they have a good reward for their toil. For if they fall, one will lift up his fellow. But woe to him who is alone when he falls and has not another to lift him up! Again, if two lie together, they keep warm, but how can one keep warm alone? And though a man might prevail against one who is alone, two will withstand him — a threefold cord is not quickly broken." (Ecclesiastes 4:9-12)

This passage is often quoted at weddings, but the context actually refers to all our human relationships; indeed, the verses that precede it talk about a man alone, having "neither son nor brother." God makes it clear to us — we need each other. Not only is there reward in a relationship, but we are all stronger together than we can ever be on our own.

Just as Jesus made the first move when He approached that lonely man at Bethesda, He also has made the first move with us. He lived His life on earth as He would have us live ours, focused on God, while also reaching out to not only heal and teach but also to share life with others; the ultimate act of fellowship. And then He died on the cross in our place.

May we, as He did, strike a balance between solitude and deep connection with a close, trusted brother in the Lord. 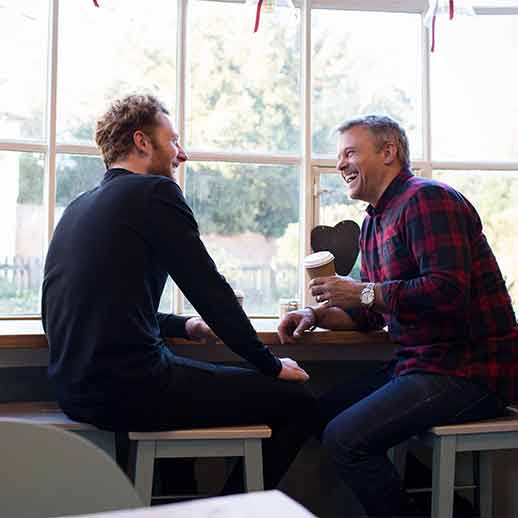