A PLAN FOR YOUR NEXT MEN'S RETREAT

HOST LIVE OR BY VIDEO

Host Vince Miller in person with this action-packed series made for men. Vince relishes opportunities to hang out with and minister to men. Enjoy messages that address the unique issues men face in everyday life—they are not just recycled sermons but messages made and written for men. Give your guys an opportunity to hear Vince's stories, challenges, and hang out with a guy who is just like them. The cost structure is simple—travel expenses plus speaking fees. Fill out the form below for more specifics.

Host Vince Miller by video with this action-packed series made for men. Purchase a low-cost video license and get access to the 4-videos that you can show to your men at your next retreat. The retreat, filmed on-site at a resort and conference center, gives you access to building a retreat at a budget that won't break the bank.

Embark on an adventure with the real King David. In 4 action-packed lessons with speaker and author Vince Miller discover how you can become God's Man. Come expectant, leave empowered, and ready to face life decisions like a man.

GET A SESSION GUIDE & GROUP QUESTIONS

The study guide is perfect for men at your retreat. It has fill-in-the-blank session guides for the main points. It also has a few small group questions that men can choose to use for cabin discussions or one-on-ones between the sessions. 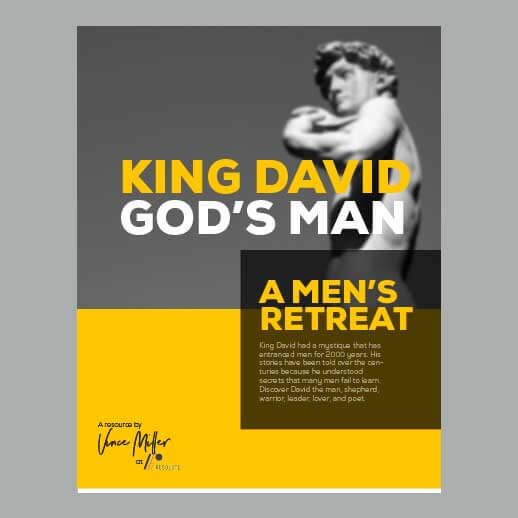 I was so overwhelmed with joy by the power of Vince's messages and the stories. It was great to put into action the idea of meeting with an accountability partner that weekend, and not hold off.

God used the messages by Vince, the small group discussion, and even the meals and free time to work on my heart and challenge and encourage me.

I can't express with words the impact that this past weekend has already made on me mentally, emotionally, spiritually, my life (now and later). It's more than a feeling. I've never been so emotionally exhausted and yet so spiritually renewed.

It was great having the small groups discussion after the main sessions, to process what we learned. This really helped it to stick.

MOTIVATING MEN ON TOPICS OF MANHOOD, FATHERING, MENTORING, DISCIPLESHIP, & LEADERSHIP.
"The problem is not 'all the bad things men are doing,' but rather the kind of men we are building. What we need to do is build better men."
BIOGRAPHY:

Abandoned by his drug-addicted father at the age of two, Vince Miller grew up in a challenging and anxiety-producing environment. He endured the strain of his mother’s two failed marriages as well as her poor choices and drug use. Fortunately, during Vince’s formative teen years his grandfather, a man of faith, stepped up to mentor Vince, guiding him through a particularly difficult period.

Though he resisted initially, Vince surrendered his life to Christ at the age of 20. Soon after, he would be with his grandfather on his deathbed as his life was taken by cancer. At that time, Vince made a commitment before God to give back by mentoring men as he had been mentored by his godly grandfather. Vince’s story demonstrates the importance of mentors to support others in overcoming the enormous hurdles that manhood, mentoring, fathering, and leadership present to a man who wants to live right before God.

Audiences respond to Vince’s stories and teaching that motivate, convict, and sometimes even shock. He inspires men to lead, mentor, and disciple others with his intelligent case for faith, inspiring presentation of the gospel, and stories of choices he made as a man, husband, and father.