Our Freedom Is Only Threatened By Fear

Our Freedom Is Only Threatened By Fear

But when Cephas came to Antioch, I opposed him to his face, because he stood condemned. For before certain men came from James, he was eating with the Gentiles; but when they came he drew back and separated himself, fearing the circumcision party. And the rest of the Jews acted hypocritically along with him, so that even Barnabas was led astray by their hypocrisy. — Galatians 2:11-13

So we need a little back story here. Paul and Peter had ministries to two different people groups. Paul focused on sharing the gospel with "outsiders" who in their day were called Gentiles. And Peter focused on sharing the gospel with "insiders," or Jews. But this new ministry to outsiders created some tension in places. One place where there was lots of tension surrounded the requirements for salvation, namely one of the oldest rites for Jews instituted by God to Abraham — circumcision. And this created so much debate that Paul and some of this his ministry partners had to make a trip to Jerusalem to debate the matter, which was Peter's home church. The requirement of circumcision was a heated debate, and there were passionate people on either side of the argument. But after a long discussion, Peter concluded that "outsiders" shouldn't be troubled with the matter of circumcision. And because of Peter's stature, apostleship, and leadership in the church, you would think this would have extinguished the debate, but it didn't. There was still some opposition.

It appears that in the future Peter came to Antioch. Antioch was Paul's ordaining church and the sending church for all three of his missionary trips. Antioch had grown to become one of the prominent churches in the Christian world, and it hosted a large gathering of Gentile believers. During some point in Peter's visit, there was a meal where a group of Gentile Christians was out eating. But instead of joining them, Peter pulls away. He disassociates with them, which was formerly a practice for Jews. They were forbidden from associating with Gentiles. And when Peter does this, he is exposed. He pulled away because there was a group of people present who were of the "circumcision required party" led by a man named James.

And this little drama exposes Peter. While Peter endorsed the gospel to the Gentiles and gave a public statement and letter endorsing Gentile belief without the need for circumcision, it appears that Peter had not fully integrated his proclamation with his daily practice. He still held to some of the old ways to save face. But his actions did not help preserve the gospel. They were hurting the progress of the gospel. And Paul is going to call him out for this.

So now that we have a picture of what's happening here, what do we learn?

We learn from Peter that fear will keep men from living in the freedom of the truth. While a man can be told the truth, know the truth, believe the truth, and even communicate the truth, fear will threaten his ability to live in and out of the truth. Truth is freeing, giving men great freedom when they actually live in it. But men don't live in it because of fear of people, fear of tradition, fear of the past, and fear of acceptance. These things are often more powerful determinants of our actions.

And the only way to integrate the two is with the help of another brother who sharpens you. One who calls you out to make you better. But when that man calls you out, you have to ensure one thing. That he's inviting you into freedom and not slavery, and this was the issue here. On both sides of Peter, a man is calling. On the one side, there is pressure from James. On the other side, there is pressure from Paul. Two men. Both followers. Both influential. But one led Peter toward legalism, hypocrisy, self-righteousness, and slavery, and the other led him to freedom, grace, truth, and liberty in Christ.

So today, listen to the truth, know the truth, believe the truth, communicate the truth but take it one step further and live out the truth. Don't let fear of people, tradition, past, and acceptance stop you. Enjoy the freedom you are given in Christ. And as you do, the way life you live will inspire others to fight for their freedom as well.

ASK THIS: Is there a fear that prevents you from living in freedom?

DO THIS: Name it, and then claim your freedom in Christ.

PRAY THIS: God, you alone have set men free. I am no longer a slave to my sin, past, people, or tradition. I am a slave of Jesus Christ alone.

PLAY THIS: No Longer Slaves.

JUEGA ESTO: Ya No Esclavos. 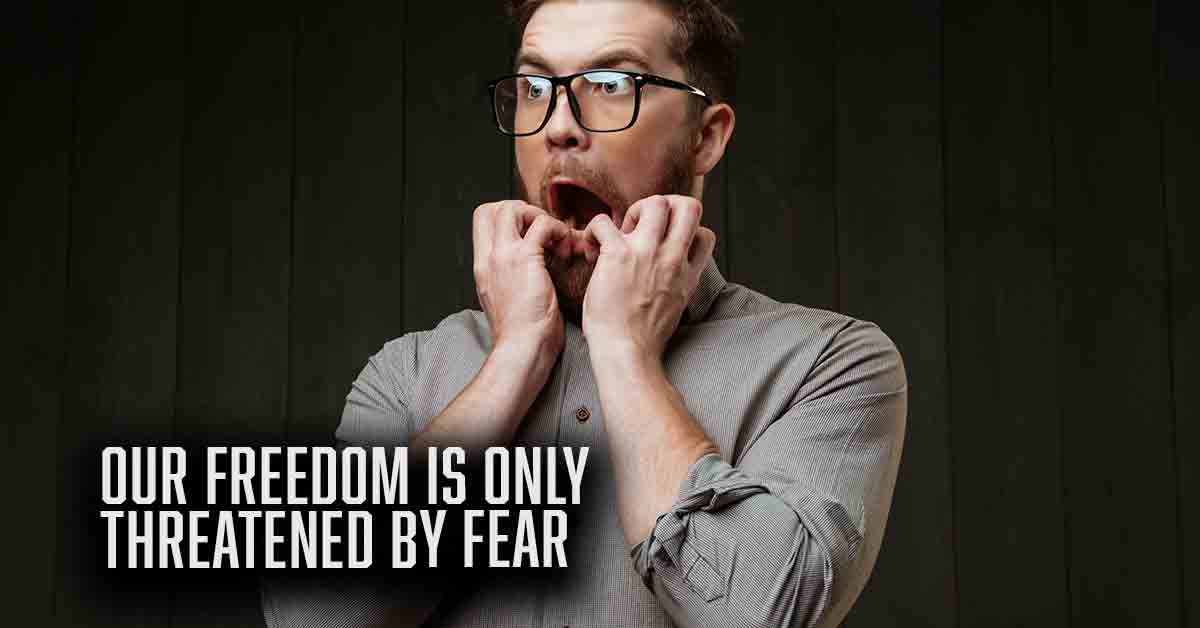 4 thoughts on “Our Freedom Is Only Threatened By Fear”