Respect Authority | Letters To My Son

Respect Authority | Letters To My Son

“Father, if you are willing, remove this cup from me. Nevertheless, not my will, but yours, be done.”—Jesus, Luke 22:42

The Posture We Once Assumed
In times past, we assumed respect of those who were elders or in authority. Respect was something extended to anyone in power, not something principally earned, debated, or immediately in question. Of course, I might be overstating this position, but in some cultures, respect is was not something earned—it was assumed.

But today it seems commonplace to question authority and even directly question it on the assumption we have the right and freedom to challenge it. We encounter a conflict of respect when we do not agree with authority. When we feel that something is injustice and unfair, but this does not mean we should disrespect the person on the other side. How we handle this conflict is critical. And while we should put thoughts, words, actions, and attitudes to the test—assuming the worst of all authority at every turn may be extreme and project disrespect. Not every leader, pastor, teacher, coach, parent, referee, politician, and officer have ulterior motives that require a response of consistent challenge. Disrespectful words, actions, and attitudes are often a result of never being taught how to appropriately respect and challenge authority when it acts “out of the character” prescribed by that office.

So how can we best respect authority?

A Few Important Principles On Respecting Authority
One | Face The Reality That People Are Imperfect
“For all have sinned and fall short of the glory of God.”—Romans 3:23

Yes, everyone is imperfect. But a person’s imperfection does not give us the right to disrespect them. This principle is more a reminder that mankind is flawed, just like you. So what if you got a ticket and felt you did not deserve it. So what if a referee punishes you and you thought you were a victim. So what if your parents punish you and you feel the punishment is unjust. These things happen, but blaming, faultfinding, and protesting authority are not helpful in these situations. These people will and do make mistakes, but this does not mean we should disrespect them entirely. As Paul said in Romans, “all have sinned and fall short of the glory of God.” That means they will make an error in judgment, unfairly discipline, or over-exercise punishment. But we have all been victims of this. And you will do the same when you are given power and authority. Merely remember life is not fair because the world is full of sin and sinful people.

Two | Authority Afflicts A Leader
“Now, Lord my God, you have made your servant king in place of my father David. But I am only a little child and do not know how to carry out my duties. Your servant is here among the people you have chosen, a great people, too numerous to count or number. So give your servant a discerning heart to govern your people and to distinguish between right and wrong. For who is able to govern this great people of yours?”—1 Kings 3:7-9

Young Solomon, who has just taken the throne from his father David, knows in a private encounter with God that he’s in over his head. God gave him something most men would love to have from their father—an incredible opportunity to lead God’s nation. But as you can see, he was concerned about stewarding this moment. A lot was weighing on him that perhaps we forget to take into account.

People given authority do not always like the power that they have been given and sometimes do not exercise it well. This is the leadership challenge we all have. Father’s don’t know how to father until they are given the opportunity to father. Leaders don’t know how to lead until they are given a chance to lead. Pastors don’t know to pastor till they are allowed to pastor. And so, leadership is an experiment in motion. And with it, we have opportunities to succeed and fail. And leaders do both. So when they fail, we need to keep in mind, they just like us, are in process. So treat them with respect as a leader whose experience, skill, and character is in process.

Three | Agreeable Action In A Disagreeable State
“[Slaves], obey in everything those who are your earthly masters, not by way of eye-service, as people-pleasers, but with sincerity of heart, fearing the Lord.”—Colossians 3:22

Eventually, you are going to be in a disagreeable situation. You will, at some point, serve under an authority that is less than agreeable and in conditions that don’t agree with you. This is always a challenge. You will work for a boss, be appointed a teacher, or encounter a leader, coach, pastor, or officer whose posture, position, and power are abusive, manipulative, and narcissistic. To put it frankly, it’s going to suck.

But keep in mind there are many people before you have served under oppressive people that were ungodly. Even first-century slaves, who appear to be in a seemingly unjust situation, had to learn to respect authority. Paul, the writer to the Colossians, encourages those slaves to use their obedience, not their disobedience, as a means of service to God. This perspective is powerful and deeply profound. Learning to do this is good for us all, and yet one of the harder lessons to learn. Submission to the authority of God given the sovereign situation at the moment.

Four | All Authority is God’s
We sometimes fail to remember that God established authority and also distributes it to people and takes it from people. Trusting God sovereign distribution of power and authority is part of the process of respecting authority. Submitting to lower authorities is one way we show support for the authority of God.

Remember, it’s God establishes authority in the government.
“Let every person be subject to the governing authorities. For there is no authority except from God, and those that exist have been instituted by God. Therefore whoever resists the authorities resists what God has appointed, and those who resist will incur judgment.”—Romans 13:1-2

Remember, it’s God establishes authority in the family.
“Honor your father and mother” (this is the first commandment with a promise).”—Ephesians 6:2

Remember, it’s God establishes authority in the church.
“...upon this rock I will build my church; and the gates of hell shall not prevail against it.”—Matthew 16:18

The issue we sometimes come to terms with is we think we are the best authority. Or we think we would be a better authority than someone else. This brings us back to point two. God distributes authority and will take power from people. Sometimes he will give it to you. But how you steward it matters. If you cannot respect God, him who has all authority, how will you steward even small amounts of it? Notice the apostle Paul’s encouragement to his young protege Timothy as he is establishing leaders in the church.

Five | Jesus Demonstrates Human Respect For Divine Authority
“Father, if you are willing, remove this cup from me. Nevertheless, not my will, but yours, be done.”—Luke 22:42.

These are humbling words. Even Jesus, at some point, submitted and respected God’s choice for his present and future challenge. While facing the imminent death, Jesus cried out for a change of circumstances. Asking for a change was not wrong. But it would have been disrespectful and out of character to not submit to God plan in spite of the challenges that lied ahead. And we too need to relinquish the rebellion we experience in our heart.

Six | Respect Out Of Holy Fear and For Clear Conscience
“Therefore one must be in subjection, not only to avoid God’s wrath but also for the sake of conscience.”—Romans 13:5

Finally, we should respect authority because we respect God. We revere Him and his ways even we do not fully understand. Complete faith infers we trust to the greatest extent that he has our best in mind. And in doing so, we encounter a great gift—a life lived with a clear conscience. A life absolved of a concern of wrongdoing. A life lived without fear of looking over our shoulder. Clarity of conscience gives us a freedom we otherwise do not have. We can run the race a little harder, live a little more adventurously, and sleep more soundly.

A Time To Respectfully Protest
But, there will be a time. Yes, they will only be a few, where you will be allowed to protest and challenge authority. How this is done is essential. What you say and how you say it is critical and speaks volumes about your leadership and character. Embrace one rule of thumb—make sure your protest is in line with God’s will done in the character of a follower of Christ. When men do this greatly, they become like great men. 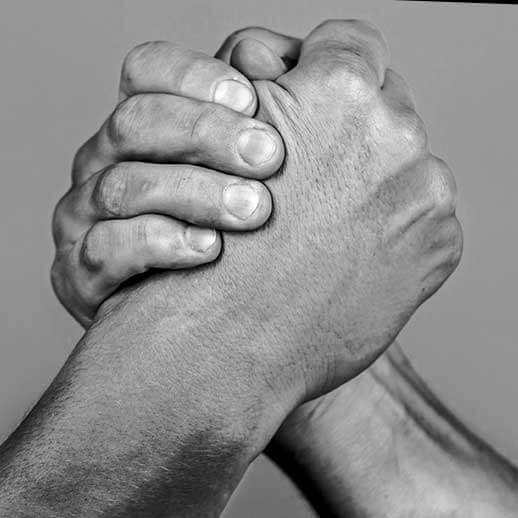