"And he dreamed, and behold, there was a ladder set up on the earth, and the top of it reached to heaven. And behold, the angels of God were ascending and descending on it!” —Genesis 28:12

This week Led Zeppelin turned 50. Some of you were not even born yet. And 50 years later this one song has generated almost 3 billion in revenue. The song is legendary, but for Robert Plant, it's a song he would rather not perform again —ever. The song turned out to be a bit of a curse. "Stairway" traverses several different types of music including folk, groove, blues, and finally ascends into some good ol' fashion hard rock. It's almost eight minutes of rock-n-roll music that surpassed the legend of the band themselves. It was the most requested song of the '70s, and long before shouts of "Freebird" from audiences, there were screams for "Stairway!" And Plant exclaimed that at times singing the song took "years off his life." He was the victim of its success.

But there is another legacy stairway, seen in days past by a man named Jacob. On his way to take a wife at his father's command, he stopped for the night to rest. Laying his head on a stone, he dreamed of a stairway and saw at the top —God who pronounces a blessing on his life. While he received a blessing from his earthly father, he was also to receive one from God himself. It's a stairway of blessing —not a curse. It's one holding promise of a future, fortune, and fellowship with generations to come. Do you long for a better blessing? Do you long for a better hope? Do you long for a better future? Turn to God, the Creator of all things who makes way for you. He gives access to heavenly blessing, removing the curse of this life. And you can't buy it. It's free.

DO THIS: Turn to God today, who is eager to bless.

PRAYER: God, I need your blessing today. As I bow my head, shut my eyes, and relinquish my effort, extend a blessing to me. 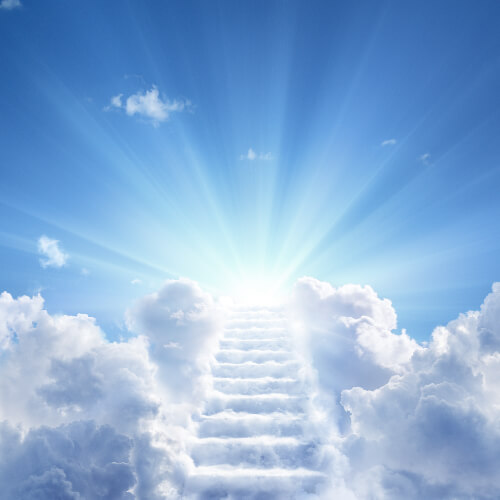