Now there was a disciple at Damascus named Ananias. The Lord said to him in a vision, “Ananias.” And he said, “Here I am, Lord.” And the Lord said to him, “Rise and go to the street called Straight, and at the house of Judas look for a man of Tarsus named Saul, for behold, he is praying, and he has seen in a vision a man named Ananias come in and lay his hands on him so that he might regain his sight.” But Ananias answered, “Lord, I have heard from many about this man, how much evil he has done to your saints at Jerusalem. And here he has authority from the chief priests to bind all who call on your name.” But the Lord said to him, “Go, for he is a chosen instrument of mine to carry my name before the Gentiles and kings and the children of Israel. For I will show him how much he must suffer for the sake of my name.” — Acts 9:10-16

This is one of those snapshots in the Bible that gives us a lot of insight into God and how he communicates with man. There is a definitive supernatural interaction happening here that clarifies how God will occasionally speak to us as we follow him. And as I share my thoughts here, I want to be careful on two fronts. First, some believe that God no longer intervenes as he does here. That God's supernatural intervention has ceased. Of course, I have a problem with that idea only because I believe God can do whatever he wants at any time. God is never subject to my theological musings about how I think he should interact with his creation. Second, I also want to note that some people use the pretext that they have "heard from God" as a means to manipulate people. This is a sin and blasphemy of the Holy Spirit. But this means we need to use discernment in how we hear from God and communicate about this. Third, the list that I am about to share is not exhaustive. This is just a list of four ways I see God communicating to these two men in this particular text.

So with those preliminary issues out of the way, here are the four ways God speaks to men in these verses. First, God speaks audibly. You will notice here that God even addresses Ananias by name. The big question we will all have is what was this like? And I really don't know for sure. All I know is that God spoke clearly enough that Ananias could communicate it, and it could be transferred to others so that eventually, a man named Luke could write it down. I know for me, there have been two times in my life I believe God has spoken to me. And it was so clearly communicated by and through the experience that it "seemed" to be an audible voice. I would not say that I heard God's direct voice, but the happening and events surrounding that moment were too unique and divine to be coincidental. Second, God speaks through vision confirmation. You will note here that God was really speaking to both men. To one, he gave a vision. To the other, he told him about the vision. And in the act of obedience by one man, the vision of the other is realized and confirmed. I do have friends who say they see visions from God. I have seen one or two in my life. I did not know initially that they were visions from God. But later, once they were realized or confirmed, I did recall the imagery of that vision. And I think this is because we often don't know they are visual communications from God until they are confirmed. This means it is usually with hindsight we see these communications more clearly. Third, God speaks through our desperation and suffering. Now, this might be more of a situational or circumstantial communication, but it is still God speaking. And Saul is getting a lot of communication from God and plenty of opportunities to communicate to him because of his desperation and suffering. Thus what is Saul doing at this moment? He's doing what we all do when we are desperate and in the middle of suffering — he's praying. I know God has spoken to me in my desperation many times. Whether I am suffering through a career crisis, financial challenge, health issue, or sudden emergency — God has spoken to me in and through each one of these circumstances. Fourth, he speaks to us and others through our gifting. And you will notice here that God says Saul is going to become a "chosen instrument." In other words, God will use Saul and his education, experience, heritage, religion, race, and even his zeal for godly purposes. God is going to reform this man into a tool for him. God is going to speak to him and through him. Honestly, I experience this voice every day as I communicate to you using my spiritual gifts.

And so, these are the four ways that God speaks to these two men here. But please note, these are not the only ways God speaks. God speaks in a variety of other ways that I don't have time to address today. But here's the ultimate question I want you to consider today.

Are you listening for God's voice?

Are you tuned in enough to hear him when he does speak? What we have here in this text are two men who are very willing to listen. They are deaf to the world. Thus, they hear more from God. And the follower who is more often hearing God's voice is liable to be living by God's will.

ASK THIS: What noise is preventing you from hearing God's voice? (Share the noise below)

DO THIS: Remove the noise and listen more carefully.

PRAY THIS: God, deafen my ears to the world. Open my ears to you. Then speak directly to me so that I can obey your will. 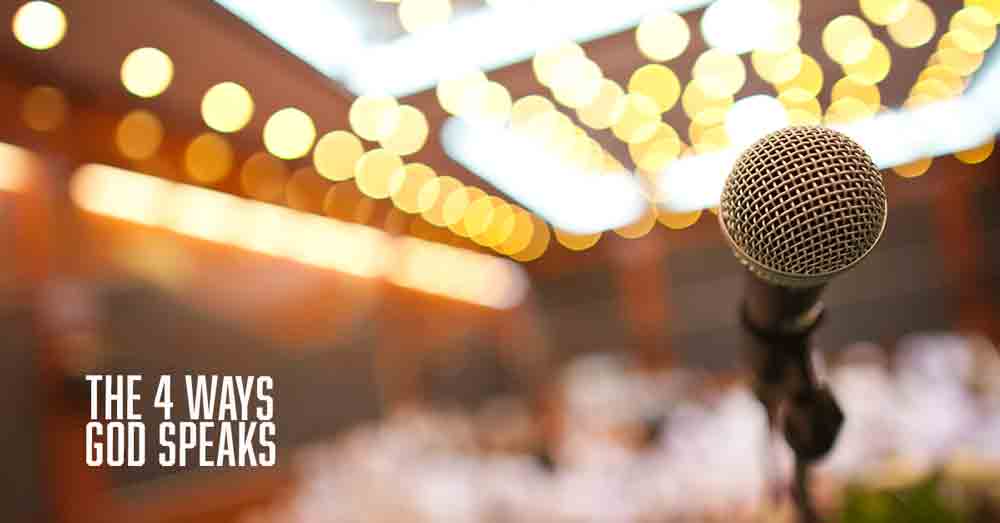