The 5 Voices Men Hear | Letters To My Son

The world is in a constant conspiracy against the brave. It's the age-old struggle: the roar of the crowd on the one side, and the voice of your conscience on the other.—Douglas MacArthur

The Secret to Listening to the Right Voice
Son, I think being a man requires tremendous strength and courage. Even more, it requires a keen awareness of where to focus that strength and courage. Understanding this is crucial to your growth and development as a man, leader, and one day, husband and father. In fact, the advice I am about to give you could be some of the most important that I ever give. It took me years to understand what I'm about to tell you, but if you hold on to this lesson, it will aid you all your life.

Five voices are incessantly screaming at men. These five voices, as I call them, are heard several times during a given day. Given the circumstances of that day, certain voices will be louder than others. But these voices have incredible power over men. They have the ability to direct our thoughts, attitudes, and actions. This means they have the potential to lead you toward life and godliness or loss and destruction. If you can grow in awareness when you hear them, identify them, and redirect them, then you will experience great success in this life.

The Five Voices All Men Hear
Voice #1 — The Man That I Think I Am
And they said to him, "Grant us to sit, one at your right hand and one at your left, in your glory."—Mark 10:37

Every man wants to be legendary. We want to hold a trophy, stand on the platform, and be praised by fans on the world's stage. And some days, you're going to think you're a legend but only in your own mind. This insidious thought is a dangerous voice for men to follow. It's evidence of our deepest arrogance, and it must be addressed before our imminent fall. Pride comes in many forms, but it ultimately plants a thought in our mind, which impacts our beliefs, attitudes, and actions. The result of this is rather ugly and makes us look stupid. I wonder if James and John felt this way when they made the statement above. The only trophy they held on this day was the award for being the "Most Stupid."

I'm sure you have bumped into a few arrogant guys in life. Men who are masters at their skill, talent, or gift have allowed their mastery to master them. These men are destined for a great fall, so don't be this man. Avoid the fall by being cautious of the sex appeal of this voice.

Voice #2 — The Man Others Think We Are
And the Pharisees and the scribes grumbled, saying, "This man receives sinners and eats with them." —Luke 15:2

Yes, it's true: others have a wonderful plan for our lives. If you haven't discovered this yet, you soon will. Bosses, coaches, teachers, and friends project a manner of thinking and acting to us or about us. I promise that they will reinforce their voices with Tweets, Snaps, and posts. With or without malicious intent, their propaganda doesn't always correctly reflect who we are; it's their perspective. Their view is right to them, whether we like it or not. Yet, we have the choice to listen to this or not.

The truth is, these sound bites from others are often compelling voices that affect men. In the moments when we are emotionally vulnerable, they can be persuasive and leading, but you need to remember that you are not the sum of what others think about you. In fact, their voices may be genuine, but genuinely wrong, and lead you down a path of destruction.

As your identity is forming, the voice of influential friends, coaches, and teachers will be loud to you. You might end up believing that what they say about you is true. Take caution, because this leads to you living up only to what others expect of you—which could be off-course. Many men have chased after this voice, and then run from one voice to the next, and ended up confused and exhausted. Even Jesus ignored these voices when they led down ungodly paths; note the soundbite above from the religious leaders. Don't follow these ungodly voices or believe what they say about you.

Voice #3 — The Man We Think Others Think We Are
We seemed like grasshoppers in our own eyes, and we looked the same to them.—Numbers 13:33

This voice may appear a little confusing when you first hear it, but stay with me for a minute or two. This voice is the one we hear when we lie down at night, staring at the ceiling. It speaks to us as we reflect on the happenings of the day, considering that occasional failure— it's the voice of our mind talking to our soul about what others think about us. Unfortunately, this voice has incredible power because it develops thoughts about ourselves in our minds that, combined with emotions, construct systems of belief about who we are.

The voice of "what we think others think" is a deceptive voice because it is both powerful and private. I cannot tell you how many times in my younger years, I lied awake in bed at night with thoughts about myself and what others think about me. These voices disturbed me for years. In bed, many men hear the voice of an unloving father, an unappreciative wife, an unsatisfied boss, an unsupportive coach, and an unreliable friend—and believe that they, the man, are responsible for the voice. Men replay the sounds of these tapes, privately shaming themselves, ruminating only on failure and allowing these voices to control their lives.

Voice #4 — The Man We Actually Are
For I have the desire to do what is right, but not the ability to carry it out.—Romans 7:18

At some point, you are going to come face-to-face with the most challenging voice any man hears: the voice of your sin. Yes, we men inflict harm intentionally or unintentionally, which results in suffering for others. You are already aware of this. But occasionally, you will hear the weightier voice of sin. You will feel sin's full weight, which is more than just making a mistake or hurting someone else; it's an offense against God. Some days this voice will be so weighty it will feel overwhelming. It will bring you to your knees so much so that you will see no way out. When this happens, I want you to remember you are not the first to feel this way. Even the apostle Paul felt this way, and he let us know this in the sentence above. While I want to say ignore this voice, this voice is true. Son, we all sin. We screw things up. We make mistakes. We have, indeed, offended God. But it's not the end of the story. This voice teaches us and motivates us to look for a solution and a better voice, which brings us to the last voice—the one you need to hear.

Voice #5 — The Man God Says We Are
"This is my beloved Son, with whom I am well pleased."—God speaking to Jesus, in Matthew 3:17

Son, I can barely hold back tears in writing this letter to you. It's God's voice all men long to hear. Stop chasing the other voices. Shun them. Turn a deaf ear to them. Listen to only one from the God and Father who created you. It's he you follow, listen only to him. His voice is trustworthy, confident, and dependable.

He was still speaking when, behold, a bright cloud overshadowed them, and a voice from the cloud said, "This is my beloved Son, with whom I am well pleased; listen to him."—Matthew 17:5 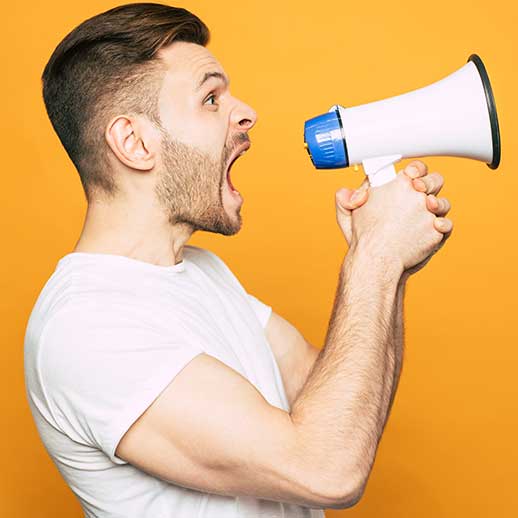