The Danger of Ambition

The Danger of Ambition

Son, most men learn about the dangers of ambition the hard way.

We never intend to slowly distance ourselves from God, family, or meaningful relationships. We never aim to become evil, manipulative, or narcissistic. We never plan to commit adultery, get divorced, be prosecuted, get fired, or be canceled on social media. But ambition has led to all these results and more.

And for those who have been down these roads and experienced these results, we know the hidden dangers. For some, it begins with seeking a competitive edge. Or for others, begins with a desire to please others who are never satisfied. And others get caught in its trappings by the promise of achievements, notoriety, and prosperity.

So, son, in guarding and forewarning yourself of these dangers, here are some things you must know.

One | Ambition Feeds on Selfishness

"as to zeal, a persecutor of the church..."—Paul commenting on his past as the man formerly known as Saul, in Philippians 3:6

These short words are how Paul identified his former behavior. His zeal was second to none. He was known for his ambition. This was so widely known that his conversion to faith was unbelievable for many Christians.

And when [Saul] had come to Jerusalem, he attempted to join the disciples. And they were all afraid of him, for they did not believe that he was a disciple.—Acts 9:26

What's interesting about a man's ambition is not that it's all bad. Ambition, zeal, and industry are good, as long the object of ambition is not the self. When the ambition focuses on the self, a man will ultimately use others around him to accomplish his own end. They become his means to elevate himself, which has now become his central focus. This is tough to see when at first, but as selfish ambition grows, the effects are far-reaching. And as we discover in Saul's life, he began using people for his personal advancement. And this process can become so self-serving and devious that deviation from this path can seem unbelievable and impossible to observers.

The dilemma is that there is no end to this progression until the pain of necessary change confronts a man. And depending on how callous and impervious to the pain we've become, it might require tremendous pain. Or, like in Saul's case, we finally have a confrontation with Jesus Christ that knocks us off our feet and onto our knees.

I have seen everything that is done under the sun, and behold, all is vanity and a striving after wind.—King Solomon in Ecclesiastes 1:14

Solomon, the wisest and wealthiest man to ever live, has something significant to teach us about the path of ambition. Money. Fame. Success. They are all attractive. Many a man will pursue them. The reason why men seek them is positive short-term gains. But the problem is that the short term gains always fall short. Moreover, the short-lived gains lead to aimless running. Therefore men from one temporary gain to the next. Before long, we look up and see we have been running after purposelessness and aimlessness.

No man wants this. We want the exact opposite—purpose and meaning. And as Solomon discovered, there was only one to find it. And in the final sentences of the book of Ecclesiastes, he tells us how to find purpose and meaning. The path to discovering it is not through human ambition but holy fear. Fear of the One who provides purpose to a man. And this is not aimlessness—this is our aim!

Fear God and keep his commandments, for this is the duty of all mankind.—Ecclesiastes 12:13

And he told her all his heart, and said to her, "A razor has never come upon my head, for I have been a Nazirite to God from my mother's womb. If my head is shaved, then my strength will leave me, and I shall become weak and be like any other man."—Samson's confession to Deliah in Judges 16:17

This confession led to Samson's fall. But he did not arrive at this moment suddenly. He got there one small decision at a time. His selfish ambition eventually caused him to get closer and closer to the edge of compromise. Until finally, he thought he was impervious to failing. Thus, his ambition clouded his wisdom and exposed his character and, therefore, his life's mission and purpose.

All human ambition will lead a man to do something that seems stupid. What's interesting is that at the moment they do it, they don't think it's stupid. It's just another choice in a series of choices that lead to a final and foolish decision. But what this decision reveals is their character. Therefore most men look back at this, realizing how stupid one decision was and the series of smaller decisions that led up to it—that can never be undone but can only be done differently from that point forward.

So what can we do?

And I will give you a new heart, and a new spirit I will put within you. And I will remove the heart of stone from your flesh and give you a heart of flesh.—Ezekiel 36:26

Instead of surrendering to ambition, great men surrender ambition itself. In the act of surrender, we loosen our grip on what has a hold on us. And we offer it to God. We submit everything our ambitions have been focused on, which is the self, and we give our ambitions and the self to a holy and willing God. Then God, who we now worship—not the self—guides us down a new path focused only on him.

And the best part is that God does something in this exchange that reignites the male ambition with a twist—it becomes holy ambition. Ambition focused solely on him and his purposes. And in this, we discover that God has a purpose for us and that he wants us to live in out in his character and in his way.

Son, be ambitious. But do not fall for the trappings of human ambition. They are, but folly, and many a man has fallen to its trapping. I love you—Dad. 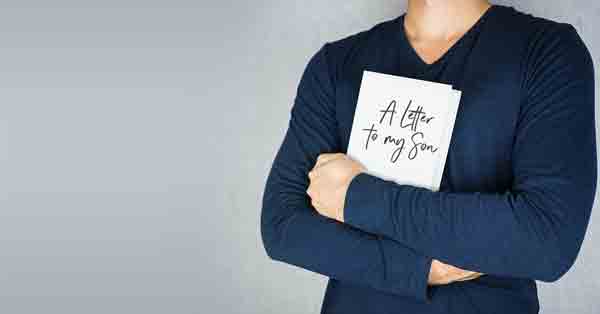