The Fight Of Apathy

The Fight of Apathy

"I never worry about action, but only inaction."—Winston Churchill

Apathy Is Our Primary Battle

We need to address a serious issue. It's our apathy. I believe apathy is the first and chief sin of men. It runs rampant among men and even well-intentioned Christian men.

As we look back to the dawn of time in as told in Genesis 3, we see our sin issues are deeply related to the fact that we remain apathetic when God has empowered us. The problem in the Garden of Eden came about because we alone watched it unfold and sat by and watched. Like we watch television at home. The entrance of sin into the world was not the serpent's fault; all Satan was doing was acting true to his character. Sin was not to be mainly blamed on woman, accusing her action does not at all resolve man's inaction. Sin entered the world because man sat on the couch and watched sin unfold and did nothing and said nothing. And in the end, the man dared to blame the woman and ultimately God for our lack of action. Yet God empowered us with tremendous authority, including the power to define creation, steward timelessness, a responsibility to a single mandate, and the enjoyment of life with a woman. With this authority came great responsibility to take action and unfortunately at the moment we were most needed in the Garden we threw in the towel and rejecting our call to speak up and act when we should have mustered some initiative for the battle. Our mandate to leadership is deteriorating, not because of the world. It's deteriorating because of our apathy rooted in selfishness for the things we want. This is our primary issue.

Here's proof of our male pattern apathy. The statistics are staggering.

For Every 10 Men In The Church

These are not great stats about men—which I am one. These statistics, either directly or indirectly infer a few things.

Please keep in mind there are nuances in every situation that impact these statistics in different ways, but these generalizations inferred are at least directionally correct. This is not a great direction for us men. And remember these statistics are about Christian men, not men in general. And I wonder if today's Christian man looks any different, or better, than that of secular man? And we have to ask the following question, "Are we representing the character of Christ in our world?" But there is a positive side.

All these facts are affected by a man who lived with some active conviction.

The strategic place to begin the fight is with our enemy—apathy. This is because apathy leads to atrophy.

I am not sure if everyone knows what atrophy is, but for those of us who have broken an arm or leg and worn a cast for a while, you know atrophy. Atrophy is the steady decline in the effectiveness of muscle due to underuse. Often we experience severe atrophy when we wear a cast or brace for an extended period. Muscle underuse causes the tissue and cells to deteriorate and breakdown. I believe many of the statistics above are proof of spiritual atrophy in men—a cellular breakdown from male spiritual inaction. And men, we need to address this. While we can blame others, church, family, circumstances, or even the general pervasiveness of sin at some point, we have to stop the blame. We already tried fault-finding in the Garden, and God still called us to accountability. At some point, we have to take responsibility for our inaction and own up to the fact that we are not doing a great job. The statistics are proof; they don't lie.

I believe we can put a dent in these statistics with spiritual attention given to these five areas:

But please keep in mind spiritual action and voice of any kind is helpful.

It's apathy that's the worst possible option. Just consider this for a moment. Action, positive or negative, is always better when our motive is right. Because we can learn from action even when we do the wrong thing. Negative action is movement and the use of "spiritual muscles." Even if we do it wrong, we learn another way not to do something-it's inaction that discontinues spiritual development.

For example, take Peter and his incident on the Sea of Galilee where he walked on water. Even though this moment does not go well for Peter, he did learn something-how to walk on water. He did something no other man ever did. And in the process, he discovered through action that led to a failure that faith focused on Jesus, which believes, and not doubts, can accomplish incredible things. But inaction is the worst possible option; without it, Peter never walks on water. And the same is true for you.

Apathy Is A Challenge For All Men

Apathy is no respecter but of persons or ages. As men, we all know we will encounter moments we don't care. We will be apathetic to:

And what is interesting about these apathetic moments is often we know what to do. Inundated with information, we simply do nothing and say nothing. Such was the case in Genesis 3. But let's discover how to fight. How to resist the impulse of inaction with properly motivated action. The Biblical narrative is 1 Samuel 17. This story gives us both an understanding of apathy and at the same time, some killer principles on how to fight apathy in the man's life.

26 And David said to the men who stood by him, “What shall be done for the man who kills this Philistine and takes away the reproach from Israel? For who is this uncircumcised Philistine, that he should defy the armies of the living God?” 27 And the people answered him in the same way, “So shall it be done to the man who kills him.”

28 Now Eliab his eldest brother heard when he spoke to the men. And Eliab's anger was kindled against David, and he said, “Why have you come down? And with whom have you left those few sheep in the wilderness? I know your presumption and the evil of your heart, for you have come down to see the battle.”29 And David said, “What have I done now? Was it not but a word?” 30 And he turned away from him toward another, and spoke in the same way, and the people answered him again as before.

31 When the words that David spoke were heard, they repeated them before Saul, and he sent for him. 32 And David said to Saul, “Let no man's heart fail because of him. Your servant will go and fight with this Philistine.” 33 And Saul said to David, “You are not able to go against this Philistine to fight with him, for you are but a youth, and he has been a man of war from his youth.” 34 But David said to Saul, “Your servant used to keep sheep for his father. And when there came a lion, or a bear, and took a lamb from the flock, 35 I went after him and struck him and delivered it out of his mouth. And if he arose against me, I caught him by his beard and struck him and killed him. 36 Your servant has struck down both lions and bears, and this uncircumcised Philistine shall be like one of them, for he has defied the armies of the living God.” 37 And David said, “The Lord who delivered me from the paw of the lion and from the paw of the bear will deliver me from the hand of this Philistine.” And Saul said to David, “Go, and the Lord be with you!”—1 Samuel 17:26-37

So I want to make six observations from this text and draw application from each of these that will help us understand the apathy of Israel and fight apathy in our own lives.

6 Observations About Men Who Fight With Apathy

ONE I PASSIVE MEN PERPETUATE APATHY.

Notice the jealous heckling of David's older brother Eliab. While this seems like good old fashioned sibling conflict, there is something more here. While this may conjure up memories of noogies, wedgies, and charlie horses, don't miss the underlying issue stirring in Eliab's heart. Could it be that passive men often have a conflict with men of action?

Men of action inquire and respond. Men of inaction understand, give an excuse, and disseminate their message of inaction to others in hopes that others will join them in their apathy. Eliab, who has been living in atrophy for the last 40 days, is perpetuating his message which is rooted in his insecurity and fear. And this is only later reinforced further by King Saul, who also does not step in to take action. And as we know, Saul was the most viable candidate for fighting Goliath, and by doing nothing, he perpetuates apathy in the Israelite army.

TWO I RESIST THE INTERNAL BATTLE TO BE APATHETIC.

Subsequently, notice that David is laughably dismissive of Eliab and thus dismissive of the mental ambivalence. Men who are resistant to apathy have developed a resistance to inaction in others and respectfully dismiss it. One of the preemptive battles that David needs to fight, before the big one, is the mental battle against the reasoning and trash-talk of his brother, other warriors, King Saul, and even Goliath. Even when the human odds were against him, his spiritual determination for God was greater than the shame of social apathy.

David next brings a fresh Godly perspective into a counterproductive viewpoint that Israel has been immersed in for well over a month. This mindset had become paralyzing to the military forces of Israel. Often apathy is addressed with audacious Godly perspective in combination with responsive action. Sometimes just a fresh set of eyes offer an advantage, but combine this with action, and you might lead others into moments that snap us and others out of apathy.

FOUR I MEN OF ACTION STAND OUT.

Next, we hear that David's perspective and thoughts made its way quickly to the King. Please beware: non-apathetic people stand out, especially in a sea of apathetic men, and this is not always comfortable. It can be risky, but remember, action is better than inaction. Even imperfect action is better than inaction. Consider the words by Winston Churchill, "I never worry about action, but only inaction."

FIVE I MEN OF ACTION CONFIDENTLY KNOW THEIR UNIQUE CONTRIBUTION.

Next, I love David's resume. Here we listen as David states his resume and God's victories of the past. We have to highlight this. Non-apathetic people are focused on the wins by and through God and simultaneously have great anticipation about what God will do in the future. A part of becoming a man of action is understanding our unique God-given gifts and putting them to work vocational for God. Try a spiritual gifts assessment if you haven't: TAKE A TEST

SIX I MEN OF ACTION ARE PASSIONATE ABOUT SOMETHING GREATER.

So, men, I am hoping that something here motivates you today to do something. I know you are thinking about some situation where you have been apathetic. Is it in your sin, parenting, marriage, finances, or personal spiritual discipline? My call today to you is to start doing something, just something, and take one more step toward action in your life. 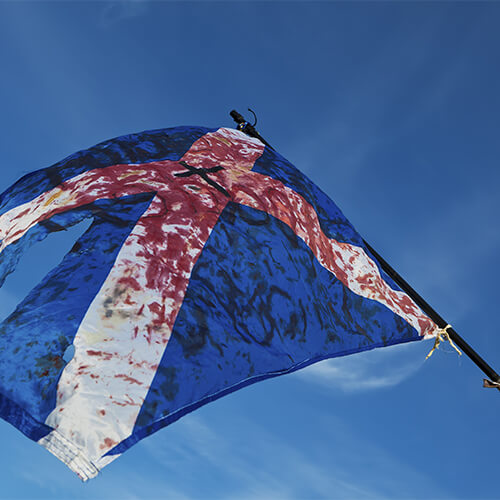