The Model of Friendship David & Jonathan

The Model of Friendship David & Jonathan

As male friendships go, few can compare to the relationship between David and Jonathan. The emphasis of their relationship was a major recurring theme throughout much of 1 Samuel in the Old Testament. The brotherhood they shared was based on love. The Hebrew word for love, which describes a platonic affection with clear political and diplomatic implications, ran deep between them and served as an example of the biblical brand of male bonding that every brother would do well to embrace — and be blessed to experience.

"As soon as he had finished speaking to Saul, the soul of Jonathan was knit to the soul of David, and Jonathan loved him as his own soul." (1 Samuel 18:1)

To love another as one loves himself in the context of the Bible means, of course, that the other person's needs, desires, hopes, and dreams matter to you. You care about the other guy's health and well-being. And though David and Jonathan both led their own lives, they also both served the same king (Jonathan's father Saul), the same army, and the same God. What critical principles of friendship can we learn from this extraordinary "knitting of the souls"?

"Then Jonathan made a covenant with David, because he loved him as his own soul. And Jonathan stripped himself of the robe that was on him and gave it to David, and his armor, and even his sword and his bow and his belt. And David went out and was successful wherever Saul sent him, so that Saul set him over the men of war. And this was good in the sight of all the people and also in the sight of Saul's servants." (1 Samuel 18:3-5)

That Jonathan gave his robe, armor, sword, bow, and belt to David not only demonstrates the sacrificial love, Jonathan had for his friend, but it also symbolizes a major component of their covenant: that when David succeeded Jonathan's father Saul as king of Israel, Jonathan would serve as his second in command. This was a symbol of genuine servitude and was a powerful gesture in that the natural line of succession to the throne would have been Jonathan. Real friends are willing to make sacrifices for each other, make plans together, and serve one another with respect and humility.

"Jonathan said to the young man who carried his armor, 'Come, let us go over to the garrison of these uncircumcised. It may be that the Lord will work for us, for nothing can hinder the Lord from saving by many or by few.'" (1 Samuel 14:6)

"Then David said to the Philistine, 'You come to me with a sword and with a spear and with a javelin, but I come to you in the name of the Lord of hosts, the God of the armies of Israel, whom you have defied.'" (1 Samuel 17:45)

Both David and Jonathan were motivated by their devotion to God and their commitment to further His kingdom. They were united in their faith and faithful to their callings. As in marriage, shared faith plays a huge role in a successful relationship — and partnership in mission and ministry.

"Then Saul's anger was kindled against Jonathan, and he said to him, 'You son of a perverse, rebellious woman, do I not know that you have chosen the son of Jesse to your own shame, and to the shame of your mother's nakedness? For as long as the son of Jesse lives on the earth, neither you nor your kingdom shall be established. Therefore send and bring him to me, for he shall surely die.' Then Jonathan answered Saul his father, 'Why should he be put to death? What has he done?' But Saul hurled his spear at him to strike him. So Jonathan knew that his father was determined to put David to death. And Jonathan rose from the table in fierce anger and ate no food the second day of the month, for he was grieved for David, because his father had disgraced him." (1 Samuel 20:30-34)

The friendship between David and Jonathan had become complicated because Jonathan's father Saul had grown to despise David and for all kinds of reasons. Can you imagine Jonathan's predicament? He was torn between loyalty to his father and loyalty to his friend. But Jonathan sided with David because he knew that his father's position was unjust and influenced by all kinds of wrong motives. At the risk of his own life, Jonathan maintained covert contact with David so that he could warn him of impending danger. Defend and protect — sometimes at great risk, but that's what true friends do for each other.

"…David got up from the south side of the stone and bowed down before Jonathan three times, with his face to the ground. Then they kissed each other and wept together—but David wept the most." (1 Samuel 20:41)

Things with Saul had deteriorated to the point where David's life was in constant danger. It was time for him to disappear, and when the two friends had to say "goodbye," they didn't know if they'd ever see each other again. One way you know you really love somebody is when it hurts so bad to part ways that the dam breaks and the tears flow. Is it worth it? Absolutely, brother. Don't let anybody tell you differently.

A friendship between men like the one David and Jonathan shared is all too rare. My prayer, guys, is that the Lord will bless every one of us with such a bond of brotherhood. 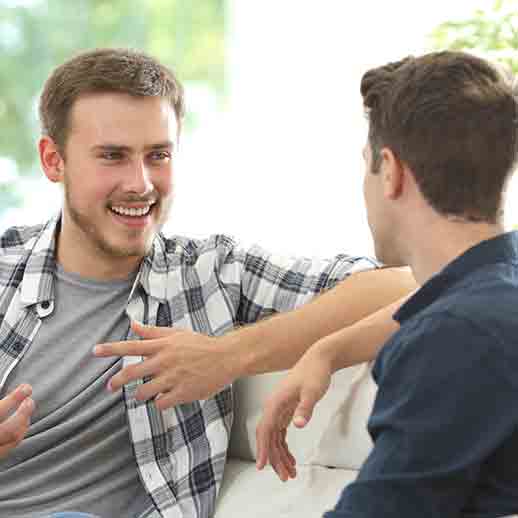