The Most Comforting Thing To Say

The Most Comforting Thing To Say

Now when Job's three friends heard of all this evil that had come upon him, they came each from his own place, Eliphaz the Temanite, Bildad the Shuhite, and Zophar the Naamathite. They made an appointment together to come to show him sympathy and comfort him. And when they saw him from a distance, they did not recognize him. And they raised their voices and wept, and they tore their robes and sprinkled dust on their heads toward heaven. And they sat with him on the ground seven days and seven nights, and no one spoke a word to him, for they saw that his suffering was very great. — Job 2:11-13

So now, in the story of Job, we get to meet his three friends. You'll notice that from a distance, they witness the despair of his situation. Job physically looks almost unrecognizable to them. There is a short customary greeting, and then finally, they just sit with him — speechless — in the ministry of presence.

Over 30 years ago, I recall encountering a similar moment. My grandfather, and mentor, contracted terminal cancer. He was pretty successful at hiding it from many of us. That was until he was admitted into the hospital, where he spent the final few days of his life. At the time, I was away at college, and it had been several months since I had seen him last. But I quickly headed home, went directly to the hospital, and found him lying alone in a hospital bed. He, too, was almost unrecognizable. His skin was yellowed. His eyes were sunken back into his head. The hair was gone from his body. His muscle had deteriorated and appeared to be hanging from his bone. As I walked in, we talked for a few minutes until he was more than exhausted. After which, I pulled up a chair and just sat with him. For the next five hours, that's all I did. And for five hours, I watched him die while listening to the ambient noise of his gasping for air. Gradually the space between the gasps increased until finally, he took his last breath.

You know, sometimes the most comforting thing we can say to people who are suffering is nothing. In fact, I commend these three friends for sitting in silence with him for seven days. The ministry of presence is powerful. Sometimes it's more powerful than anything that can be said. Besides, people say some pretty stupid things to people who are grieving or going through significant suffering. In fact, after this seventh day, these three friends are going to open their mouths. And as soon as they do, they are going to give some awful advice because they have come to some wrong conclusions about God, what he's doing, and why. However, these men, right at this moment, do exactly the right thing. They K.M.S. (Keep Mouth Shut). And it's commendable.

So don't undervalue the ministry of presence by speaking into a suffering person's life. Instead, sit with them! It's powerful!

ASK THIS: Who do you need to sit with today? (Share this person's first name in the comments below).

DO THIS: K.M.S. and value presence over proclamation.

PRAY THIS: God, thank you for walking planet earth and coming close to us when we felt far off. May I do the same for others.

PLAY THIS: Breaking The Silence. 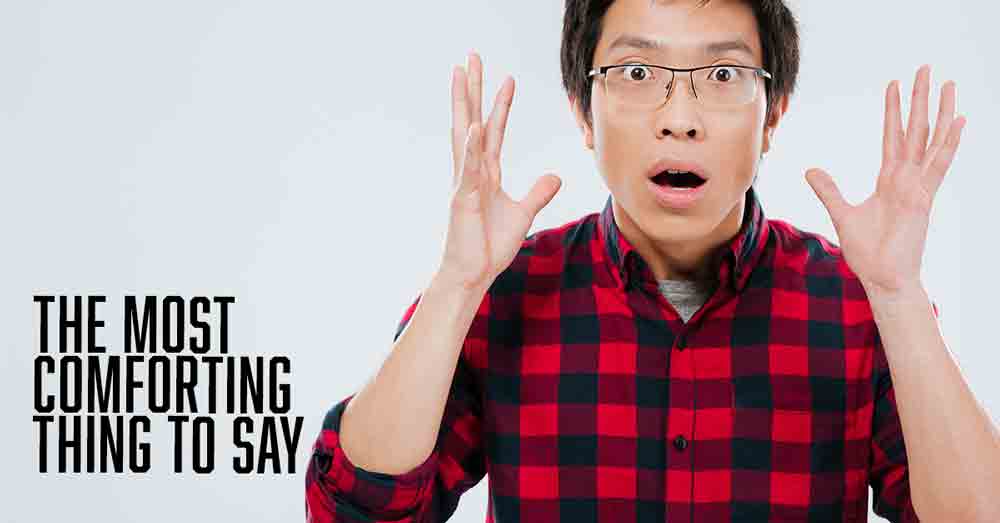 14 thoughts on “The Most Comforting Thing To Say”