What Theater Floor Do You Need To Walk Onto?

What Theater Floor Do You Need To Walk Onto?

And when the town clerk had quieted the crowd, he said, "Men of Ephesus, who is there who does not know that the city of the Ephesians is temple keeper of the great Artemis, and of the sacred stone that fell from the sky? Seeing then that these things cannot be denied, you ought to be quiet and do nothing rash. For you have brought these men here who are neither sacrilegious nor blasphemers of our goddess. If therefore Demetrius and the craftsmen with him have a complaint against anyone, the courts are open, and there are proconsuls. Let them bring charges against one another. But if you seek anything further, it shall be settled in the regular assembly. For we really are in danger of being charged with rioting today, since there is no cause that we can give to justify this commotion." And when he had said these things, he dismissed the assembly. — Acts 19:35-41

As the city executive shows up, he does three things:

First, he tells the audience to act consistently with their beliefs. He proposes that if Artemis is who they say she is, which was already widely accepted, she will defend herself. She doesn't need a crowd to cheer or defend her since she can defend herself. Second, he infers that Demetrius is the sole reason for the public eruption. And he states that Demetrius's issue is not an issue with Artemis or general belief in Artemis but a simple business issue. And he implores them to bring their business issue to the city official who is open for business and ready to discuss the matter at hand. Third, and the primary point, he suggests that they are all in danger of rioting if they don't settle down. And if you are a student of history, you will remember that just ten years before this moment in Rome, there was one of the most notable riots of all time. It was the riot that essentially ushered the Roman Republic into becoming the Roman Empire. It was stirred by the assassination of the Roman General Julius Caesar, who attempted to establish himself and the ruler of Rome. As history states, the representative government that lasted over 500 years led by the Senate conspired to kill him and stabbed him repeatedly on the Senate floor. This resulted in something the Senate did not expect and began the turn of the Republic into becoming an Empire.

Now, why is this important?

Well, because Demeterius's point is that Paul and his gospel were a danger to Ephesus. On the other hand, the city executive points out something different. That Paul and his companions were of no threat to them. Instead, he illustrates that they are the ones who are the threat. They are in danger of becoming seen as an insurrection by the government of the Roman Empire who is now led by one of Rome's most tyrannical emperors — Nero.

Now, what can we learn?

I believe people who are led by mass hysteria and human fears end up doing irrational things. We have seen this more and more in recent times. People driven by fears of the economy, business, inflation, markets, government, media, decrees, and diseases do irrational things. In this situation, one person (Demetrius) uses a human fear to incite insurrection against people adversely affecting his business. In the next instance, another person (the city clerk) uses human fear to incite submission to the empire. And people in masses follow along because their fears lead them. But to some degree, we are all led by fear.

And, of course, we know he didn't. We read this yesterday, but verse 31 reads:

And even some of the Asiarchs, who were friends of his, sent to him and were urging him not to venture into the theater.

And so we discover Paul had no fear of this moment. He was willing to walk right out onto the theater floor. And why? Because he feared something greater than man. He feared God. He feared God more than the economy, government, media messaging, and even life itself. And in his fear of God, God provided a different solution that did not require him to walk onto the theater floor.

So today, what do you fear? Do you fear man? Or do you fear God? If you really fear God, then what theater floor do you need to walk onto?

ASK THIS: What theater floor do you need to walk onto?

DO THIS: Be willing to step out, and listen to what God wants you to do and say. 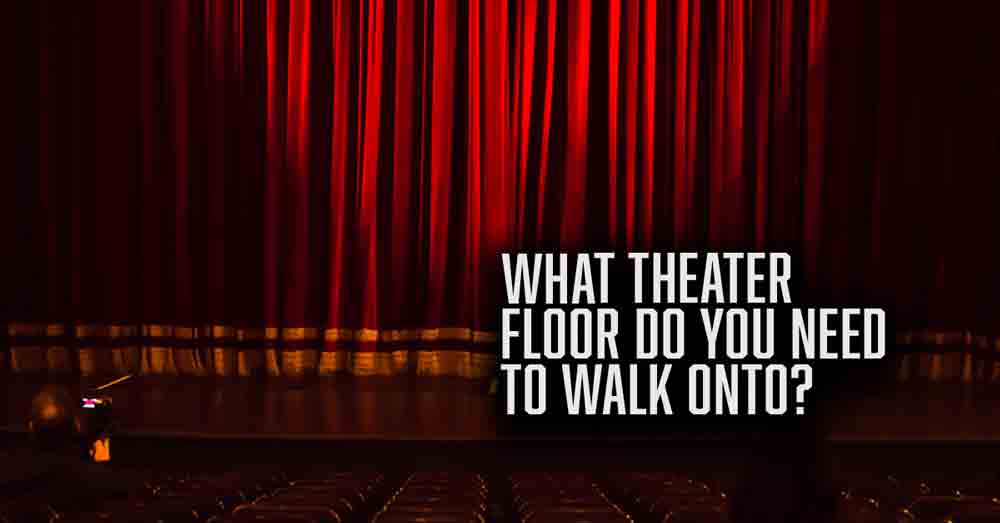 9 thoughts on “What Theater Floor Do You Need To Walk Onto?”