What To Do When You Are Frustrated

What To Do When You Are Frustrated

After the uproar ceased, Paul sent for the disciples, and after encouraging them, he said farewell and departed for Macedonia. When he had gone through those regions and had given them much encouragement, he came to Greece. There he spent three months, and when a plot was made against him by the Jews as he was about to set sail for Syria, he decided to return through Macedonia. — Acts 20:1-3

So after more than two years, Paul decides to leave Ephesus. And in this text, we get a very short summary by Dr. Luke about what happens next. If you want to read the fuller context, you need to read 2 Corinthians chapters 1-7. Remember, the book of Acts gives us a flyover, but if you want to look at what is going on in these churches that Paul visits, all you need to do is read their respective letters.

But to give you a quick look, here is a summary of what is happening in Acts 20:1-3.

Paul leaves Ephesus. He travels to the region of Macedonia. He is hoping to meet up with Titus, who was at Corinth. Right now, the Corinthian church was having all kinds of issues, which is why Paul wrote a letter to them entitled 1 Corinthians. In this letter, Paul instructs them on addressing these matters, and Titus is there to help. As Paul leaves Ephesus, he stops at Troas and does some ministry there, hoping to meet up with Titus and hear the report. But Titus doesn't show up. So Paul travels further into Macedonia, probably Philippi, hoping to run into him. And he does finally connect with Titus. Titus communicates to Paul that the issues in Corinth had been dealt with and reconciled. But somewhere during this time, Paul writes 2 Corinthians, a letter he sent to them before he came. As we know, Paul did arrive at Corinth. He stays there for three months, which in this text, he references when he talks about visiting regions of "Greece." This would be his last visit to Corinth. And guess what Paul did during these three months there. He wrote the letter to the Romans. Easily the greatest book he ever wrote. And guess what, all this happens in 3 verses here. That's a lot of stuff. That's a lot of ministry that happens in three short and cryptic verses.

I think we sometimes underestimate the power, impact, and consequence of daily obedience. Don't we? We fail to see how God uses the daily actions of listening and following him to involve us in a strategy that reaches way beyond our life. This is because we have such a myopic view of life. This is because we don't see the same way God sees. It even appears here that Dr. Luke skips over some significant events as he recounts history. In three verses here, Paul went from Ephesus, Troas, Philippi, to Corinth. He met up with Titus and many other men along the way. In addition, he wrote at least two books during this time 2 Corinthians and Romans. Which, by the way, are letters we read even today and continue to impact the lives of people around the world.

So today here is my message to you. If you feel a little unaccomplished and frustrated, I know how you feel. I actually think Paul knows how you feel. I think he was a little frustrated with the church in Corinth. I know this by the way he wrote the letters that he wrote to them. And you may need to hear today. It's okay to feel this way. It's okay to feel frustrated and unaccomplished. But in this feeling, don't do this. Don't stop being obedient. Just be obedient in your frustration. If you have a frustrating marriage, a frustrating job, or a frustrating child, don't let feelings of frustration deter you. Be obedient. Because you may discover one day that during your time of frustration, God was doing more through your daily actions of obedience than you thought he was. And you may look up one day to discover that God was impacting the world around you in a way that you could not see.

ASK THIS: What is your frustration?

DO THIS: Be obedient.

PLAY THIS: TobyMac - Help Is On The Way. 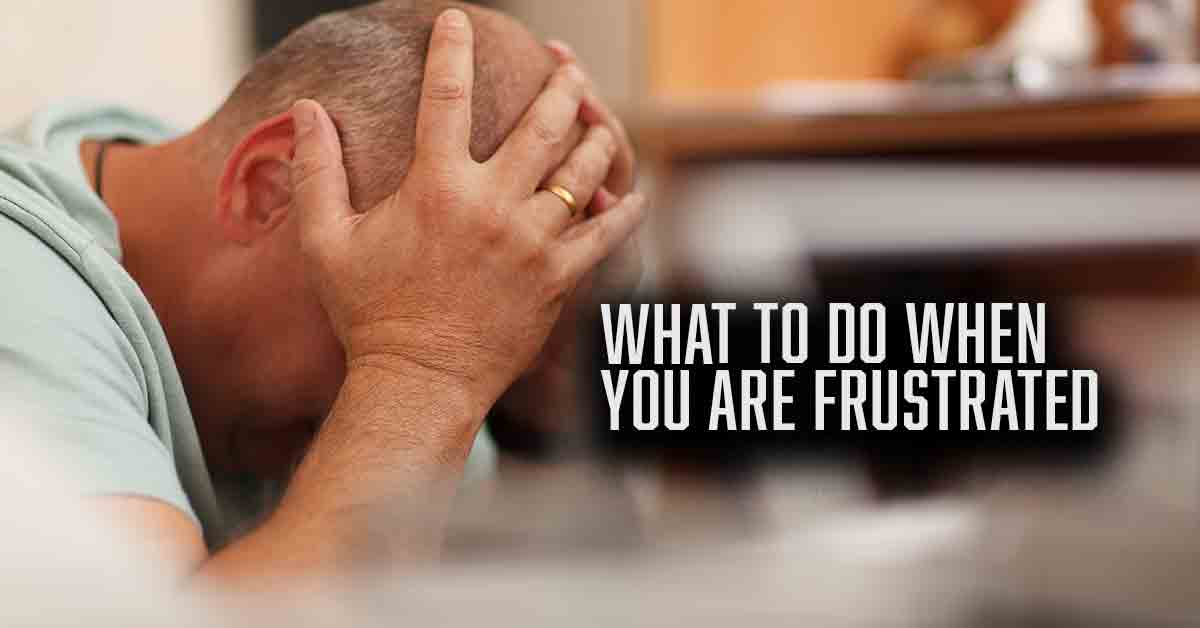 55 thoughts on “What To Do When You Are Frustrated”