When The Magic Wears Off

When The Magic Wears Off

But there was a man named Simon, who had previously practiced magic in the city and amazed the people of Samaria, saying that he himself was somebody great. They all paid attention to him, from the least to the greatest, saying, “This man is the power of God that is called Great.” And they paid attention to him because for a long time he had amazed them with his magic. But when they believed Philip as he preached good news about the kingdom of God and the name of Jesus Christ, they were baptized, both men and women. — Acts 8:9-12

We are desperate for entertainment. This is true in any culture and at any time. In our time, we find ourselves entertained by the hottest trends. Binging the latest streaming series. Debating the latest happenings in government, politics, education, and health. Consuming the latest sporting competition or controversy. Seeking the latest adventure in fear of missing out. But eventually, the magic wears off. At some point, we want something more. More real, lasting, and fulfilling.

In this text, Simon was very captivating. In his time, his popularity was at its peak. He even amazed all types of people in the region with his feats of magic. He was very entertaining, but eventually, people discovered that his entertainment was only serving to benefit him. Thus it left people very entertained and very unfulfilled. That was until something far more real, lasting, and fulfilling came along.

And so their attention was captured by someone new. A man named Philip. He taught about a man named Jesus who at one time walked through their town. This Jesus spoke to a Samaritan woman at the city water well who came teaching about a fresh new life and true lasting fulfillment. Philip told them that he was no ordinary man. He came to fulfill all their true needs. And he wasn't a magic man. He was the Son of God who came bringing lasting fulfillment to all who believed. And he, too, performed miracles. But they were not miracles accomplished by trickery and sleight of hand. They were proof that he had the power of God, evidenced by the greatest miracle of all time — the defeat of death by rising from the dead. And he did this so that they could be in a relationship with God and find true and lasting fulfillment.

In our time, I promise you that the things of this life that currently entertain you will eventually no longer entertain you. You will discover their value is very short-lived, and they only benefit those who perform them. And as the magic wears off, you will seek something more. And that thing you seek is not a thing. It's a person. That person's name is Jesus Christ. He is the Son of the Almighty God, and he wants to have a relationship with you. And he is so fulfilling that you will leave the entertainment of the culture behind. Just like these Samaritans, you will leave behind the cultural magic, entertainment, propaganda, and deception for true fulfillment found only in Jesus Christ.

If you are feeling unfilled today, take some time to reflect on why. Ask yourself the simple question — "Why do I feel so unfilled?" Ruminate on this question for a moment. I bet you will discover that the magic of a thing you thought was supposed to be fulfilling has worn off. Address this thing by laying it aside and leaving it behind. Pursue lasting fulfillment in a relationship with Jesus. He's not a magic man. He is the real thing. And a relationship with him is more fulfilling and entertaining than you could ever imagine.

ASK THIS: Why do you feel so unfilled?

DO THIS: Lay down that thing that is not providing you with fulfillment and be fulfilled by a relationship with Jesus. (Share what you need to lay down in the comments below.)

PRAY THIS: God, I bring [name the thing] to you. I want to have a relationship or renewed relationship with you! Amen 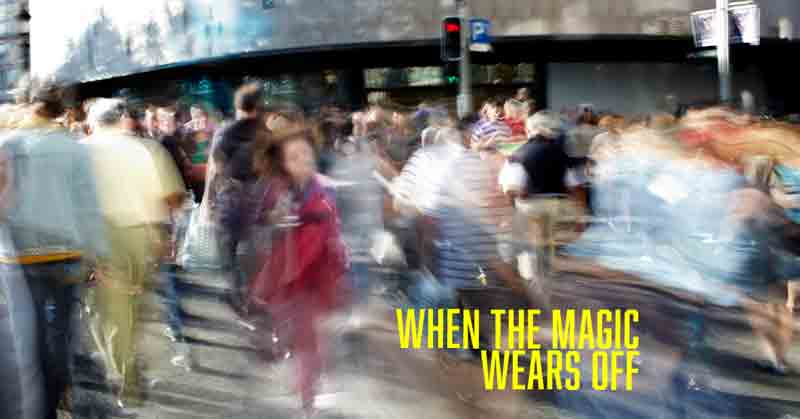 6 thoughts on “When The Magic Wears Off”