When You Have Taken It Too Far

When You Have Taken It Too Far

Now Herod was angry with the people of Tyre and Sidon, and they came to him with one accord, and having persuaded Blastus, the king's chamberlain, they asked for peace, because their country depended on the king's country for food. On an appointed day Herod put on his royal robes, took his seat upon the throne, and delivered an oration to them. And the people were shouting, “The voice of a god, and not of a man!” Immediately an angel of the Lord struck him down, because he did not give God the glory, and he was eaten by worms and breathed his last. — Acts 12:20-23

So this is the end of Agrippa. Basically, these verses recount that Agrippa was not just hostile to Christians but to anyone that opposed him in any way. And there seems to be some animosity that has built between Agrippa and the coastal people of Tyre and Sidon, which were just north of Caesarea. We don't know exactly what has happened, but it appears that Agrippa was withholding resources or transporting resources to them. And somehow, the people of Tyre and Sidon get weary of the trade embargo and find their way to an inside man who will advocate for them. This inside man happens to be the guy who is in charge of the King's bed chambers. So Agrippa called a celebration at the stadium in Caesarea, a stadium built by Herod the Great, Agrippa's grandfather, and it is still there today. This was a location for gladiator games which were held on a regular rotation.

In any event, Agrippa calls a regional assembly. Josephus, a well-known historian during this time, says Agrippa entered the assembly in a white and silver robe that glittered in the sun. It was stunning and radiant. As he took his seat on his throne, he delivered his message, and following; the people erupted in cheer for him. They began chanting, “The voice of a god, and not of a man!”

While Agrippa felt like he was at the height of his notoriety and power, this event became quite an embarrassment. The text says that "immediately an angel of the Lord struck him down, because he did not give God the glory, and he was eaten by worms and breathed his last."

I think sometimes we have all taken something too far. Teasing. Sarcasm. Joking. Humor. But in this instance, it was arrogance. The uncontrolled arrogance of King Herod Agrippa I. And Agrippa had gone far beyond what God was going to allow. So again, an angel of the Lord's army shows up on the scene and strikes him dead. And all his glory is turned to worm food. Quite embarrassing if you ask me.

I think for all men, pride is lurching. We all have manifestations of pride in our life. For some of us, this is more overt, and for others, it's more covert. But the lesson here is that we need to be attending to it. Because we can take some things too far with God, and one of those things is human pride.

Proverbs 16:18 reads, "Pride goes before destruction, and a haughty spirit before a fall."

ASK THIS: Where is pride lurching in your life?

DO THIS: Address it before it goes too far.

PRAY THIS: God, forgive me of my pride. I come low to you. 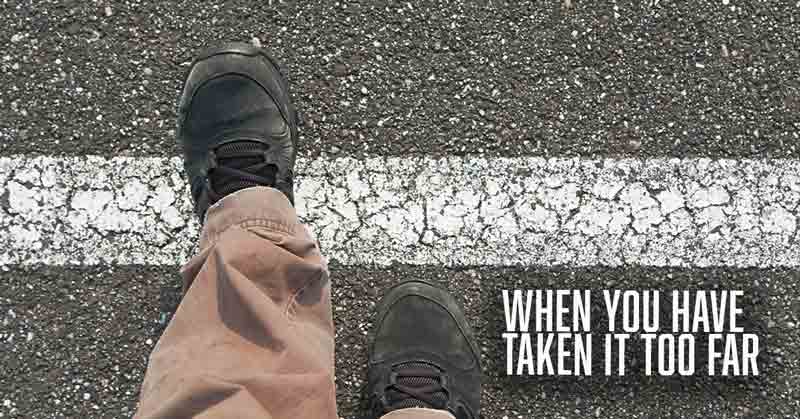 3 thoughts on “When You Have Taken It Too Far”