Why The Resurrection Is So Important

The best evidence for the resurrection and why the bodily resurrection of Jesus Christ is so important to our faith. A short video and blog by Vince Miller, speaker, and author at Resolute.

Why the Resurrection is so Important

He fellas this is Vince Miller.

I am excited you are joining us. Today’s topic is Why The Resurrection is so Important.

Now before we dive in, please do me a favor hit that subscribe button below, so you can get notified when new videos come out in this series. And you are going to want to get notified so you don’t miss out!

Also, head over to the website today at beresolute.org, that’s beresolute.org and do something for me while you are there. Sign up for the men’s daily devotional! I write one fresh every day for men just like you and they as always are short sweet and to the point.

And with that let’s dive into our message for today which is, Why The Resurrection is so Important

So each year, we as Christians, celebrate a day that holds utmost importance to us. It is called Easter or what we more commonly call Resurrection Sunday. And I believe this day in history, is the most important event in all history.

For some reason, we don’t talk about this event much, but maybe one time each year. And I think we should talk about it much more. And here is why.

But the one contested issue is always how that tomb ended up empty. And Christians, of course, believe it is because Jesus Christ defeated death by raising himself from the dead. And his resurrection was so important that every message preached to the early church centered on the bodily resurrection of Jesus Christ as proof of their faith. Every single message included it.

For some reason today we have left the resurrection out of a lot of gospel messages. We talk a lot about the life and the death of Jesus, but little about the resurrection. But remember even atheists and opponents would agree with these tenets of our faith. The dividing issue is that empty tomb and how it got empty.

Now how that tomb got empty is of much debate. And there are a number of theories about how that happened, which I don’t have time to address today. But I will share this one predominant theory that opposes the bodily resurrection of Jesus Christ. It’s the theory that some Christians, or a group of Christians, stole the body. They devised a plan, snuck in, and stole his body. And while this may sound reasonable, it’s pretty hard to believe. Here is why. Most of Jesus’s followers were scared to death of the religious and political powers of the day. In fact, Jesus’s most ardent supporter, Peter, denied a relationship with Jesus in the final moments of his life and was hiding out in those days that followed his death. In addition, when they arrive to pay their respects at the tomb, they were surprised the body was missing. Add to this that the Roman government had the tomb guarded, sealed, and a massive stone rolled in front of it. And, even if by some great act they were able to steal the body, how were they able to keep it hidden for the last 2000 years? And why would dozens of followers share the message of the resurrection and even die for this message if they knew they had a body in their possession? No one would do that. I know I wouldn’t be willing to die for something I knew to be a lie, nor would I talk about a resurrection publicly if I had a body in my possession.

So let’s back up a second.

And guess what we have that witness. His name was Saul.

One day, soon after Jesus’s death, Saul was traveling down a road to Damascus, on his way to persecute Christians, nonetheless, and had a confrontation with the risen Lord. Jesus Christ appeared to him. During this appearance Saul was blinded. In the story, we discover that a Christian named Ananias was told to go heal him but Ananias was terrified. Why? Because Saul was one of the most violent opponents of the Christian faith. But Saul, who became known a Paul, had witnessed the resurrection of Jesus and became one the most ardent messengers of the Christian faith. In fact, many Christians in his day had a hard time believing this for years because Paul was such a hater. But after encountering the risen Lord, Paul ended up becoming the most influential leaders in the Christian movement and wrote about two-thirds of the New Testament, basing his entire message on this one thing—the bodily resurrection of Jesus Christ. Now I would say that’s some pretty compelling evidence, if not the most compelling evidence for me.

So now given this very compelling evidence, why is the bodily resurrection of Jesus Christ so important? And this is a critical question to ask.

But here is the problem—physical death is imminent. One out of one still dies. Even Jesus died. What we need to address is the real issue when comes to death—the reality of death itself. The innate desire we have to live forever.

So what’s the real issue and problem?

The Bible says the real issue and problem is the disease of sin that stems from our disobedience to God. Listen to what Paul says in Romans.

Romans 6:23—For the wages of sin is death.
Romans 3:23—For all have sinned and fall short of the glory of God.

You see our real issue is not death in this life—that’s imminent. We are all going to die. Our real issue is the sin that leads to death itself. Now sin, is a little bit of a cryptic word, but its meaning is to miss the mark in obedience to God. And it’s this issue that we really need to contend with. The government, health professionals, and the president do not have the solution to this problem—only God does. And his solution was Jesus Christ. The one who lived, died, and proved his power over physical death and also our sin by raising in bodily form for you and me. His resurrection is the ultimate proof that he is the provider for victory over sin and death. And Jesus said this:

John 11:25—I am the resurrection and the life. Whoever believes in me, though he die, yet shall he live.

The solution for our impending death is so simple it’s a little unbelievable. It’s believing that Jesus is the life that gives us life. You see Jesus is the only real healer and hope-giver. Jesus is the only answer to the problem of death and our desire for life. It is only in him we have any kind of hope over death and sin. If you want life, you have to go to the one who has power over life and death and that Jesus Christ.

So today if you are weighed down by sin and death and you are looking for hope there is only one who gives it. It’s the Creator of all things. Listen again to Paul who saw the risen Lord with his own eyes.

Today if you are looking for hope beyond death and your sin. Hope over the hopelessness of this life, then only Jesus provides it. It begins with belief and results in the Spirit of God dwelling in you.

If today is a day you want to make this decision you can either let me know right here, and I will send you something to help you get started in your relationship with Christ.

And remember—He is risen, he is risen indeed. 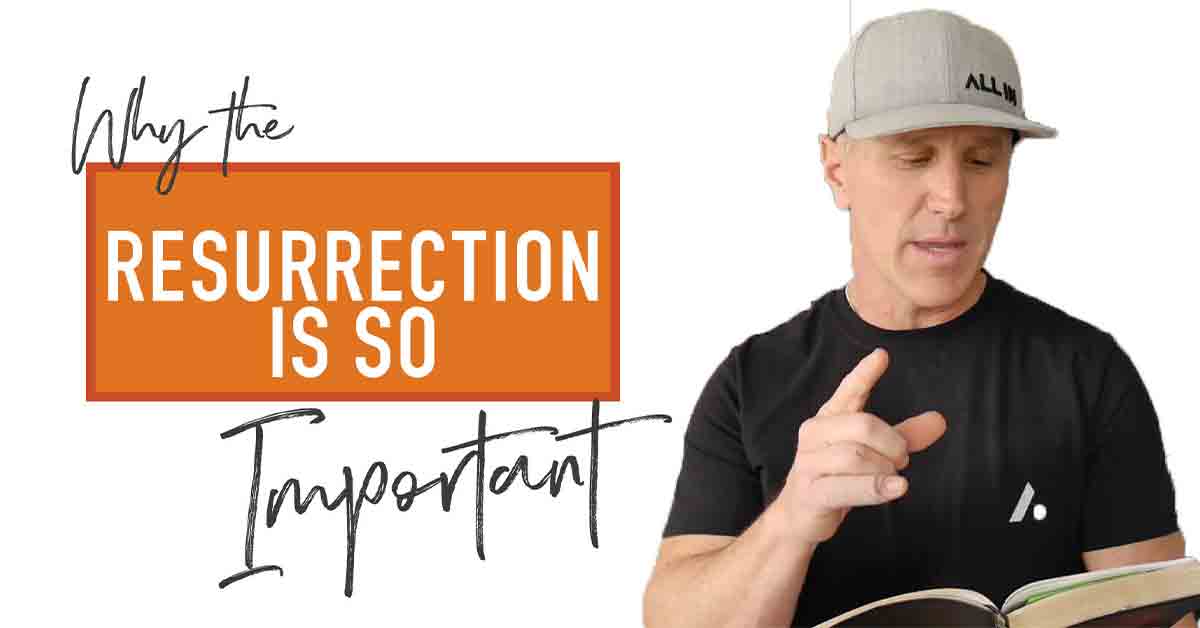 One thought on “Why The Resurrection Is So Important”